Back to the Little Bighorn?

Last year I had planned on revisiting the Little Bighorn Battlefield National Monument, but the Covid mess prevented me from flying to Montana. This September I am hoping to rectify that situation. One of the most interesting markers on the battlefield commemorates the site where Captain Myles Keogh's "I" Company was shattered by an Indian charge led by Crazy Horse and White Bull. 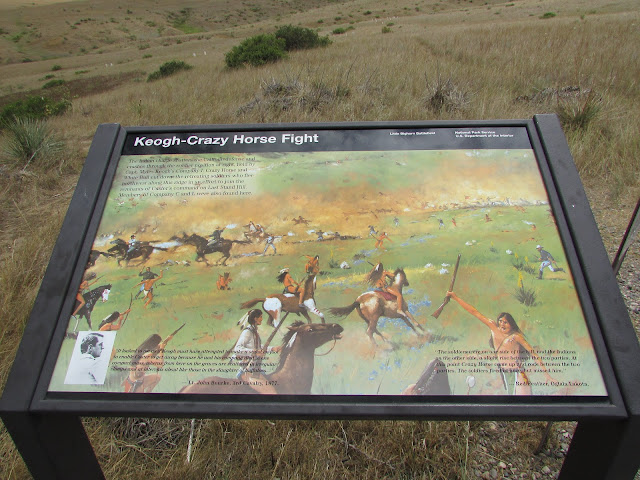 Although I am Anabaptist in my theology and in no way desire to glorify war, the Little Bighorn Battlefield is OUR history, and bravery is a virtue that can be acknowledged in anyone, including one's foes. As I said, I am especially drawn to this site where the small number of markers indicate the places where Miles Keogh and his men met their fate. A band of brothers, many of them were Irish. They were thousands of miles away from their birthplace, dying for a country that had no love and little use for them. But they had taken an oath of allegiance and were soldiers to the end, no less than those who fought them. They died bravely and they died together. It is, again, OUR history -- all of it. I will return to that scene to honor them and the warriors who fought them, to honor their bravery and not the government policies rooted in greed and ignorance that led to this tragic battle.

Perhaps the best overview of the battle can be found in a series of videos posted by a Youtuber who goes by the name of CusterApollo. Here is the first of two videos he has published on the Keogh sector of the battlefield.

It's an absolutely brilliant series. If you can't make it to the actual battlefield, it's the next best thing to being there. By the way, I became interested in Custer when, as a kid in Hawaii, I read about the Fetterman Massacre. Plus, in 1910 my paternal grandparents emigrated to Hawaii from Billings, Montana -- hence my father's birth on Oahu in 1918 and mine there in 1952.