Hey folks. Hope your weekend is going gangbusters. I had a race today. A half marathon. I have strict rules against running back to back halfs on consecutive weekends but I impudently ignored them today. Side note: I also did this race last year. It's called the Foot Levelers Blue Ridge Marathon/Half Marathon. It touts itself as "America's Toughest Road Race." And why not? Here are the stats:

If you don't believe me, look it up.

Nobody expects a PR here. The city of Roanoke actually brags about that fact. Last year I spent about half of the race walking uphill. You see, you've got to climb two mountains: Mill Mountain, which tops out at the famous Roanoke Star; and Peakwood, a fancy subdivision of homes situated about as high as you can get. The course was so challenging that I promised myself never to run it again  to run it again this year. Today I crawled along at a snail's pace. I wasn't the only one. EVERYONE walked. Of course, no half marathon is easy, even if you go slow.

There were about 6,000 runners at today's event. Here, the elites get things started. 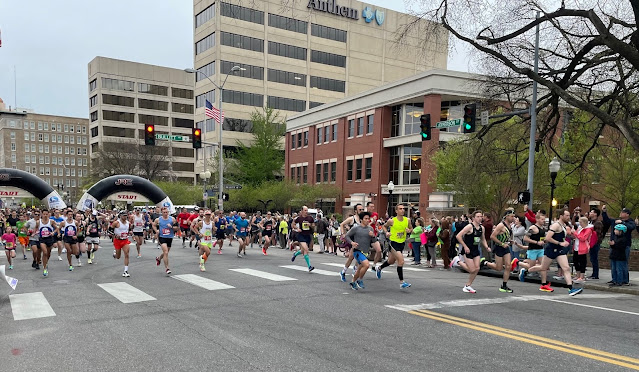 Then us lesser mortals got into the game. 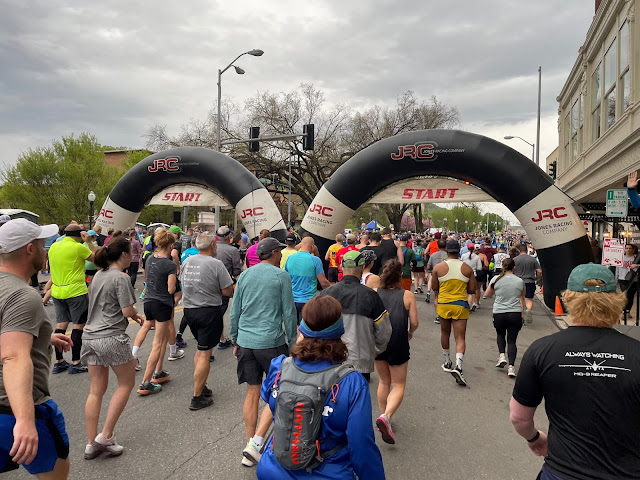 The first mile takes you through downtown Roanoke. You can see that the weather was perfect for a foot race -- overcast skies and about 45 degrees. 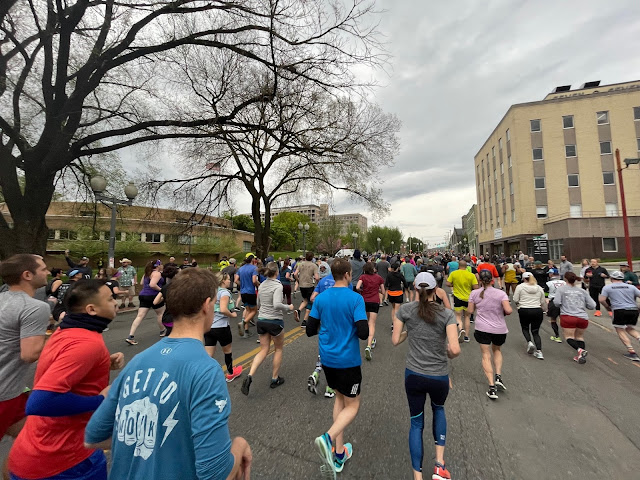 Here we are entering what I'm calling "church row." St. John's Anglican Church is on the right. 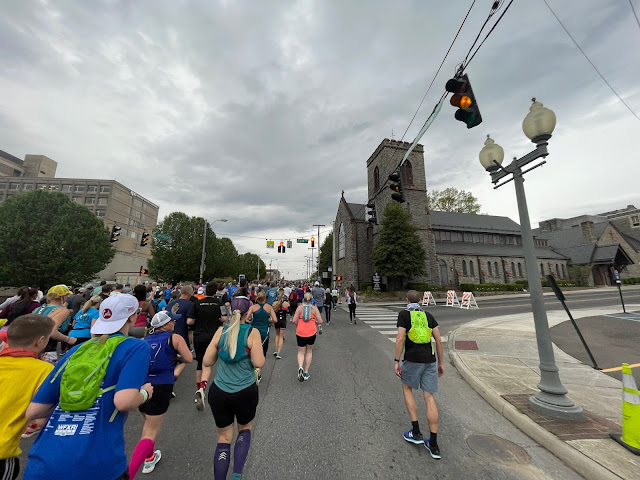 Last night I attended its Good Friday service. This might well be an evangelical Anglican congregation because there was a lot of talk about sin, repentance, and Christ's substitutionary atonement. The liturgy took you through the stations of the cross. The service was almost all music (of the highest quality),  Scripture reading, and prayers. By the way, there was no clapping after the solos or choir numbers. Good on them. (You can stop typing. This is just my preference. I don't expect everyone to agree with me.) 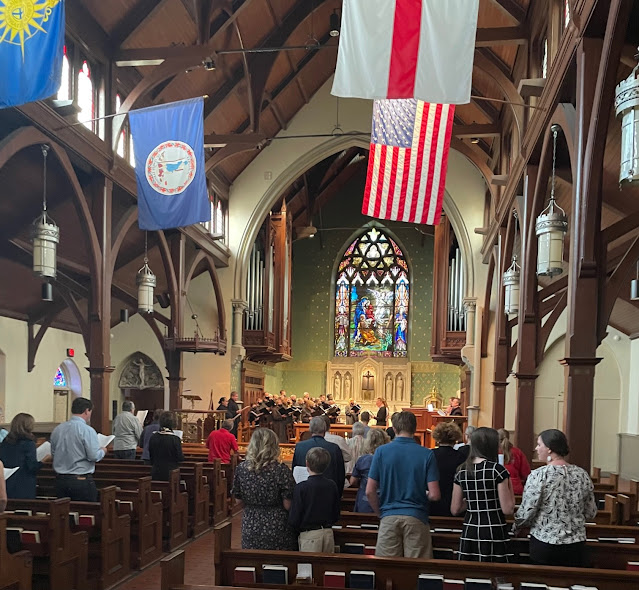 The next part of the course took you across the Roanoke River. The descent to the top of Mill Mountain began just after that. 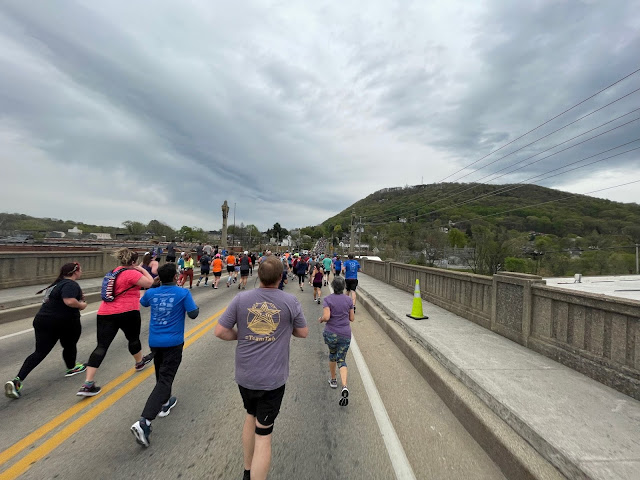 Here we are still running, or at least trying to. 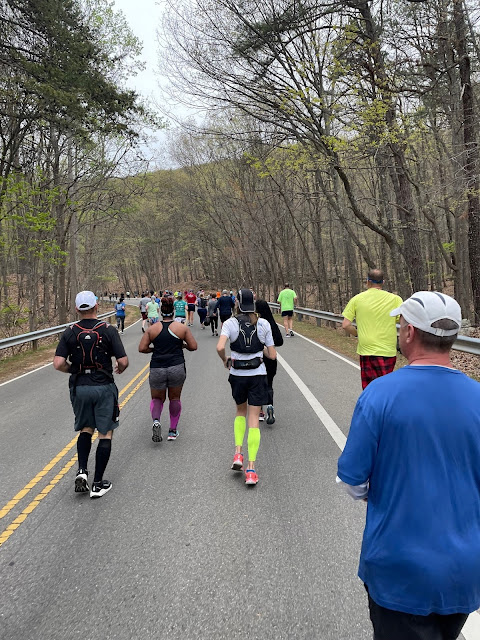 But we soon gave up and decided to walk this part of the course. When you run a race, everyone will tell you to smile and have fun. At some points, that's nearly impossible. So, if for a while you slow down and walk, so be it. 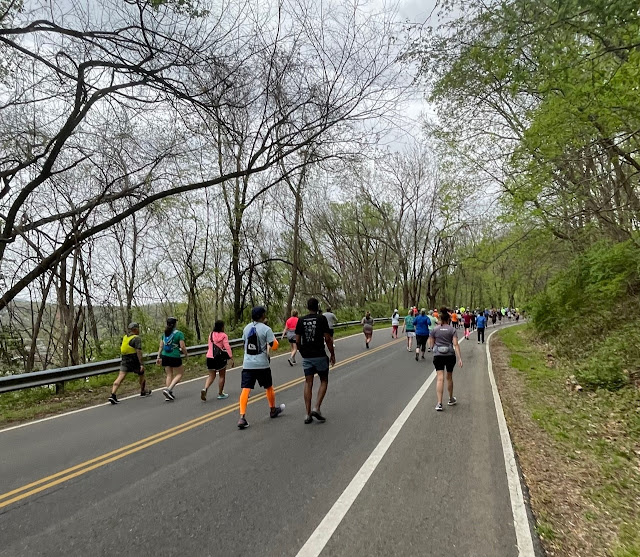 After 3 miles you finally defeat your nemesis -- The Roanoke Star. Here, many racers stopped to have their pictures taken above scenic downtown Roanoke. We even forgot about our pain for a second. 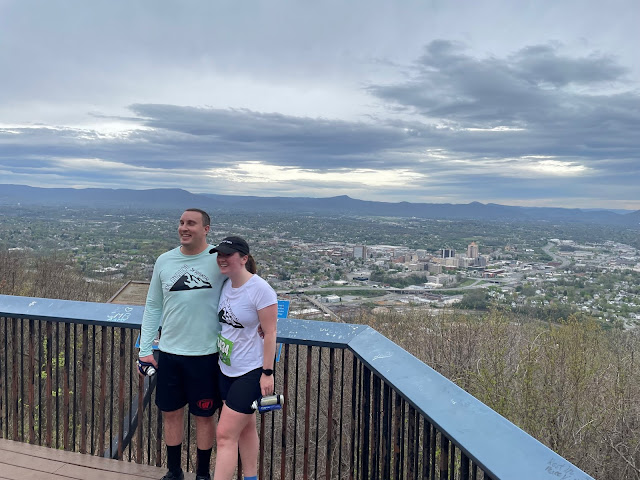 After that, we were blessed with a long downhill stretch. 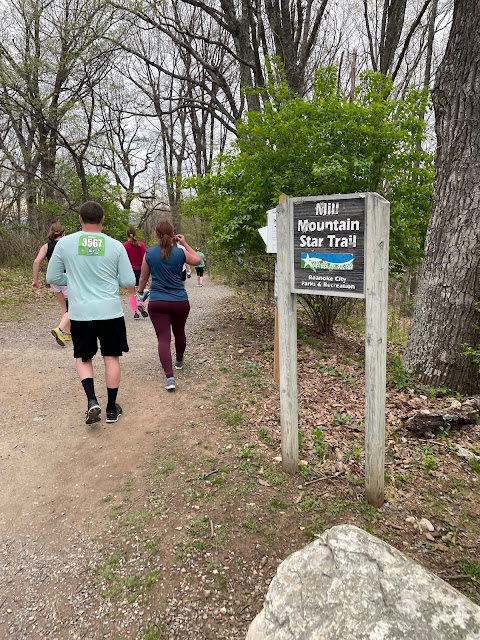 You had to remember not to accelerate too much or else you would blow out your quads. 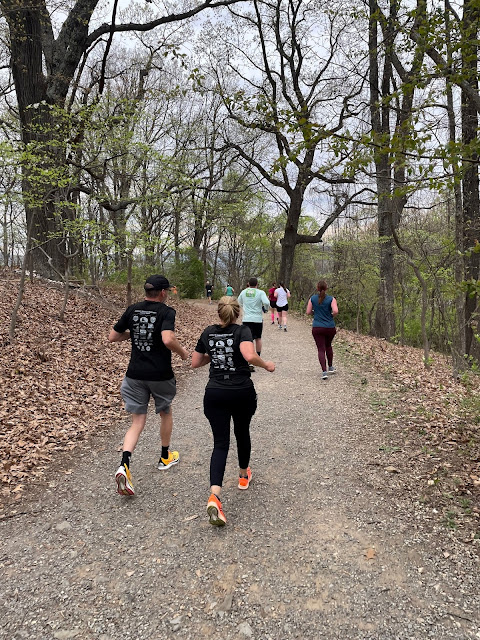 It sure felt good to be running again. 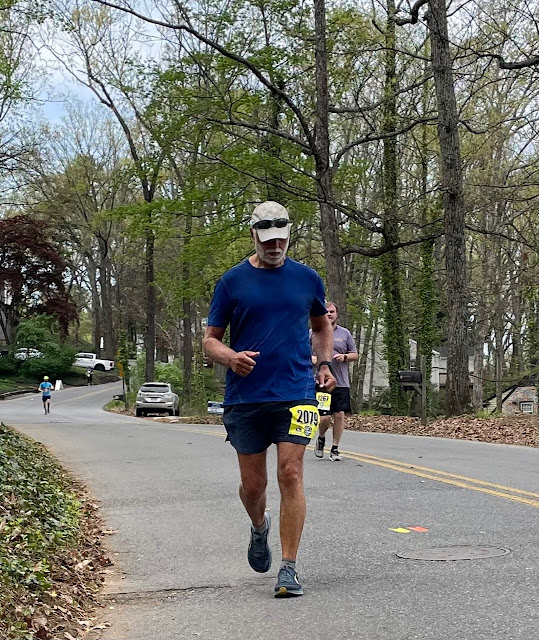 Then it was time to climb Denali Peakwood. Again, even the fittest among us resorted to walking. What else could you do? 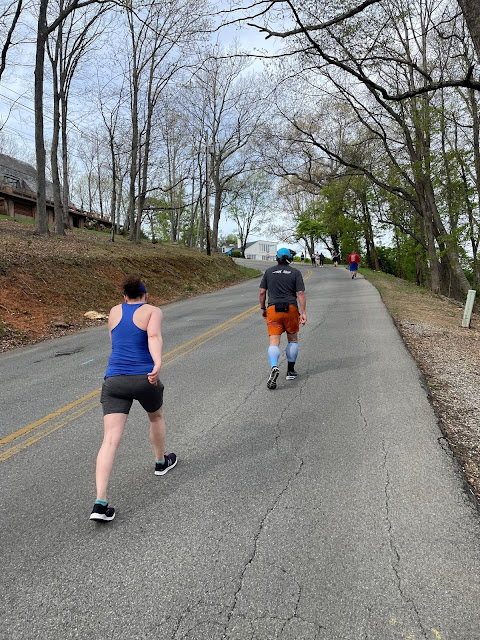 The summit at last!! 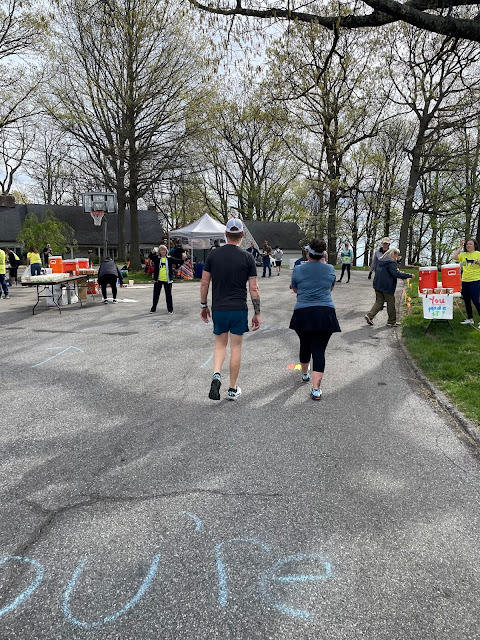 But it wasn't the last summit. We still had smaller hills to climb, including one just before the finish line. Ugh!! 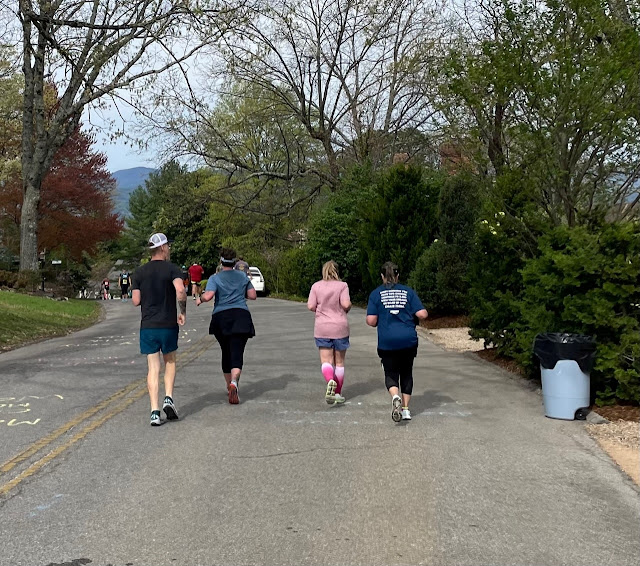 At this point my iPhone battery died so no more pictures. I had nothing else to do but keep going. I remember how people started out fast and then petered out as the race progressed. I started rather slowly and gained momentum as I went. Soon the race was over. You got your race medal and a big slice of delicious pizza.

In summary, it was a lovely race. The scenery wasn't too bad, and the organization was good. But the best thing I can say about it is that we were well-supported along the way. Some of the signs you read as you ran were hilarious. 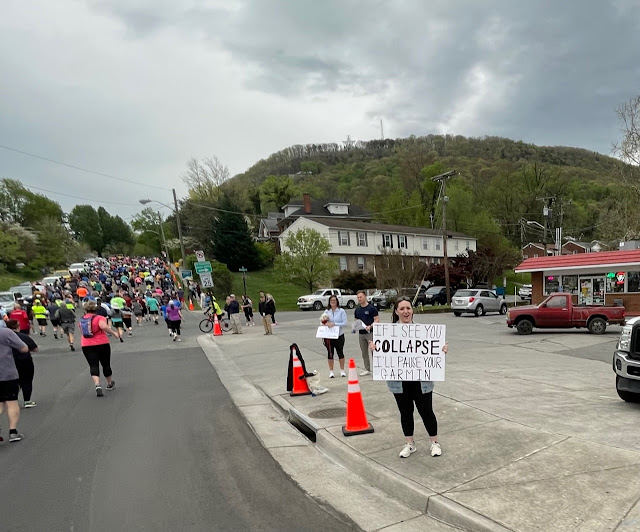 However, I think that the volunteers must have had some kind of pre-race meeting where they all agreed to lie to your face with words such as "Looking good!," "Almost there!," or "Doing great!" 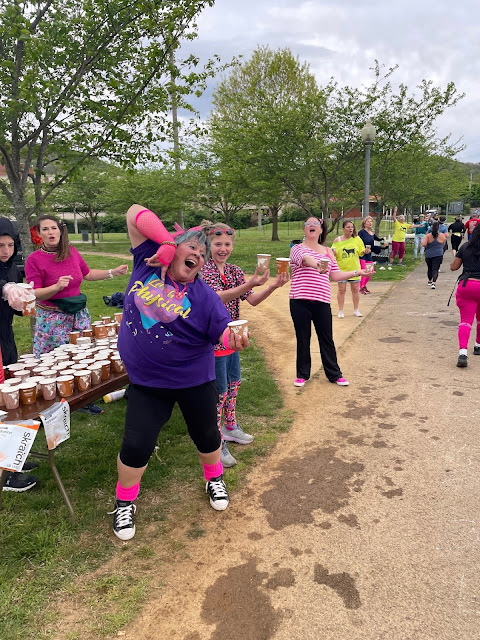 Oh well, sure lightened things up. 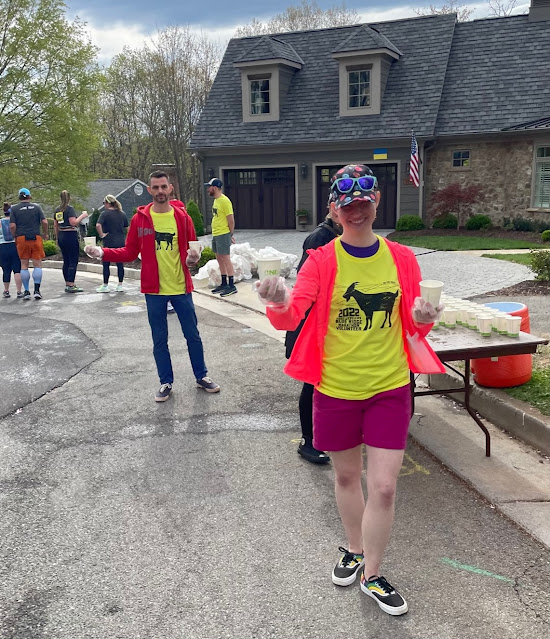 I want to thank each and every volunteer who showed up for today's race. You made the day a smashing success.

Off for pizza (round two)!