We live in a fearful generation. There are at least 800 official phobias, from A to Z. These include agoraphobia (fear of open places) and claustrophobia (fear of enclosed places). There's even a phobia called phobophobia. Anyone care to guess what that means?

Recently I ran across a phobia that really stood out to me. It seems a bit of a stretch but it actually does exist. It's called homilophobia, or the fear of preaching, that is, of listening to sermons. 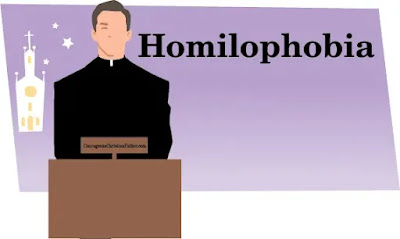 Here's the scoop on it if you're interested. I don't think I've ever met a person who has admitted to suffering from this phobia, though I suspect that some of us have had major bouts with "fear of bad preaching." The great John Stott once called the state of preaching today "abysmal." (Go here if you don't believe me.) There's much truth to that, methinks.

That said, I think there's another way we can define "homilophobia." I'm referring, not to the fear of listening to sermons, but to the fear of giving them. Substitute "respect" for "fear" and I think you will get my drift. Preacher friend, there may have been a time in your life when your pulpit world seemed safe, secure. Preaching was "no big deal." You gave it your best, and you often felt your best was good enough. But you were much younger then. Now, as a more experienced preacher, you find yourself so stifled you can hardly breathe. The task seems a lot more daunting, now that you have a few years under your belt.

At the end of his career, Billy Graham said, "If I had to do my ministry over again, I would have done two things differently. One, I would have prayed more. And two, I would have studied more and preached less." James would agree: "My friends, not many of you should become teachers. As you know, we teachers will be judged with greater strictness than others" (James 3:1, GNT). Of course, God knows our weaknesses. He knows that even when we labor long and hard over our messages, we still feel like we missed the mark by a mile. And yet, as Elton Trueblood once put it, "Holy shoddy is still shoddy."

It's probably better not to preach than to preach poorly. Think: "study more and preach less." I sometimes feel a certain guilt in knowing that I have not always pursued excellence in the classroom with the same relentless effort and determination I give to my running or lifting. Those aren't very enjoyable times, because I know I've fallen short of God's (and my own) standards. So I dig in and redouble my efforts to work out my own sanctification amid daily battles with apathy and sloth. It's not easy, but God never promised it would be (James 3:1).

Being a preacher of God's word is a sweaty struggle. It's one of the hardest things you will ever do. No wonder it deserves our greatest fear and respect. That said, huge rewards await those who face the struggle head on, work diligently, and don't let up.