Why I Run (and You Should Too)

Question of the Day: What do all of these products have in common?

If you guessed Proctor & Gamble, you guessed right. I mention this because I noticed that P & G is sponsoring my next marathon, the Flying Pig, in Cincinnati on Oct. 31st. I have already run this marathon three times. It is a fantastic race. 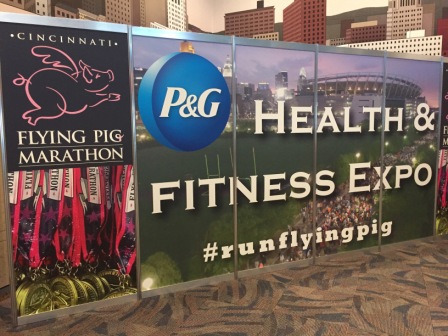 If you've ever been to a marathon expo, you know that the sponsors are there pre-event, at the event, and post-event. That's because they're not stupid. Today's runners are a highly educated lot. 79 percent of us have at least a college degree (compared with only 27 percent of the U.S. population). 73 percent of runners report a household income of more than $75,000 (as compared to the national average of $52,000). They have credit cards, they fly, they eat out, and they spend money.

Of course, you don't have to be wealthy or educated to be a runner. You just have to put on a pair of shoes and go. Anyone can become a runner as long as they're willing to take that first step. And if you want to run a marathon (which almost any healthy person can do), there are always local races you can enter. For me, that means Richmond, Raleigh, Durham, etc. — all within an easy drive (with no hotel or air fair costs).

Incidentally, did you know that 6 in 10 runners are female? Or that in the U.S., currently 50 million people run — the largest total number in the world? That's about 20 percent of us. I hear that the Flying Pig will be packed with first time marathoners this year because so many of them started running as a way to cope with Covid. Less than 1 percent of the U.S. population has completed a marathon. Yet, according to Jeff Galloway, almost anyone can complete a marathon after 6 months of training if they use frequent walk breaks. Even if you're older like me, running promotes energy and confidence. Even the ability to perform everyday functions like getting out of bed and walking is better among runners than among non-runners.

I started running after Becky died. It helped me get back on my feet. It gave me a constructive activity to focus on. It gave me goals to demonstrate to myself that I had recovered. Running is now a constant in my life. Many people probably think I run to lose weight. That's only a small reason why I run. Running helps me come to terms with difficulties and eventually let them go. Running has helped me in more ways than even those closest to me will ever know.

Have I convinced you to run yet? Well, I did my best.