The Key to Happy Running

Here's a pro tip (I'm not a pro at anything, especially running, but I like the lingo) for any of you who struggle getting started with your run. Last Friday, when I ran 8 miles, I noticed that I was really struggling through the first 15 minutes of my run. I felt a bit deflated because I thought I should be able to move right into my stride. The older I get, the harder it is to run that first mile. After that, I seem to be good to go and I start to feel like a runner again. I think I know the reason: Starting your run is more a mental game than a physical one. Your mind has to convince itself that the run you are about to do is actually beneficial for your body and not deleterious. Here's what I've found. I've found that the first 15 minutes of a run definitely feel easier for me if I keep then super easy and slow -- as in jogging slower than I can walk. Then, when I increase my pace, everything is in sync and I begin to feel oh so much better. After that, I'm all good. This is called (I believe) a dynamic warm-up. Keep in mind, I'm a guy for whom at one time the first 15 minutes of his run were also the last 15 minutes of his run. Here's another interesting fact. The term "endorphin" comes from "endogenous morphine." Endorphins are produced when your hypothalamus and pituitary gland produce pain relief and a sense of well being. You can actually feel this happening to you when you run. Just another reason to push through those first 15 minutes.

The Germans have a saying:

"Every beginning is hard." No matter what you are undertaking in life, including learning how to read New Testament Greek, it will suck at first. There's nothing unusual about that. The goal is to not worry about it and just keeping going until you get it right. This picture was taken on July 25, 2015. 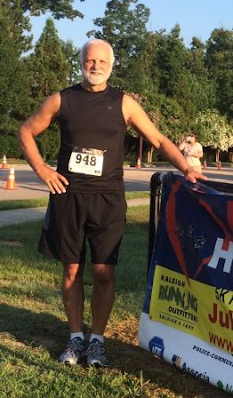 It was taken at one of my first 5K races. I never dreamed I would keep running races. But here's what happens. As many of you can attest, a 5K is merely an imbedded kernel that later blooms into a desire to run a 10K, then a 10 miler, then a half marathon, then a marathon, and then an ultramarathon and maybe even farther. Each race has a finish line, and as you cross that first one, somehow your confidence begins to grow and you begin to think, "Maybe I can cross other finish lines as well."

Friends, the key to happy running is to know what you're in for. Then, when the hard times come, you will be prepared for them. You will embrace the difficult and keep right on rolling.