Meet My Friends Chase and Phillips

Having spent the day on campus I am ready to engage in some YouTube viewing -- you know, surfing at Pipeline, or the finish line at the Hardrock 100 mile race out in Colorado. I love watching videos in the evening, especially when I'm tired and need some mindless entertainment. But I'm never happier than when I'm reading a book. Allow me to introduce you to one -- an old friend, if you will, that I met in college back in 1975. 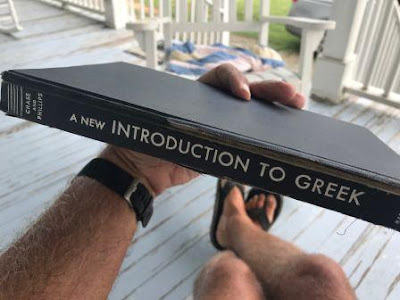 Yes, this was THE textbook I had for beginning Greek at Biola -- you know, the class I lasted a grand total of 3 weeks in before dropping. "Chase and Phillips" it was called by some students (and "that horrible textbook" by others). It was a Classical Greek textbook designed for one semester at Harvard but, since Biola wasn't exactly the Harvard of the West, students took two semesters to trudge through its verbose, garrulous, pedantic pages. 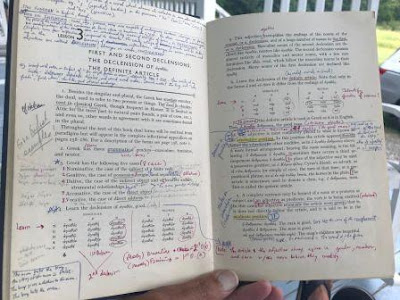 By chapter 2, you felt like somebody had smacked you over the head with a 2 by 4. Here you're introduced to Greek accents, which means you have the joy of learning terms that nobody can remember and nobody understands, terms such as oxytone, paroxytone, ultima, penult, antepenult, paroxytone, proparoxytone, perispomenon, and properispomenon. In that chapter the authors actually had the gall to write, "These terms, though formidable, will save much laborious periphrasis." Well, sirs, I'll tell you what else will save much laborious periphrasis. How about I just drop the class??!!
Dave Black is the exact opposite of a natural-born language learner. That's why I love this book. I love this book because it reminds me of how close I came to missing my calling in life. I almost changed my major from Bible to Christian Ed like everyone else who couldn't handle the rigors of proparoxytones and antepunults. But in what has got to be the irony of the century, yours truly -- ye olde drop-out Doofus, the language imbecile -- was hired to teach Greek from this very textbook exactly 2 years after he had dropped the class. Today I teach, not because I want to, but because I have to. It's what I am. I know of no other way to live. Despite my absolute lack of language acumen, I found myself on a career track that has brought me incredible joy and satisfaction in life. Today I can say the same thing about running. The heart and soul of running is fighting through adversities, pushing hard, and being determined. I haven't forgotten the triumph I felt when I finished my first marathon 5 years ago. Nor have I forgotten the absolute thrill of entering the classroom for the first time as a teacher in 1976. Chase and Phillips, I owe you everything. Because of you, my life changed. Your book helped me to hone my craft as a teacher. You taught me what to do and what to avoid doing in the classroom. You reminded me that Biolans were not Harvardites, and that they needed a textbook that was written for kids from Hawaii. (Hmm, didn't a kid from Hawaii eventually write that book?) Greek isn't all about suffering and pain and going hard and pushing through. If you're going to stick with it, it better be fun. It's impossible to be unhappy while digging into the Greek New Testament on your own.

Friend, if something is worth doing, then it's worth doing now. Don't wait for tomorrow. If there is a goal you want to achieve, start working toward it. How completely amazing is it that a 69-year old man should have come so close to missing what became his life's calling? It goes to show that your background doesn't have to be a limiting factor in going after your dreams.

When I told a friend of mine that I had done the run-swim-run in Virginia Beach last Saturday, he asked, "Did you finish?" I wanted to quit at least a hundred times. My finishing time was slower than most. But what I lack in talent I make up in tenacity and pure stubbornness. Whatever you're facing in life today, it's completely normal to feel bad. But whining and bellyaching won't help matters. Instead of complaining about how difficult life is, focus on what it's going to take to get you to the finish line.

Remember: It's not about perfection. It's about relentless forward progress. Just ask my buddies Chase and Phillips. 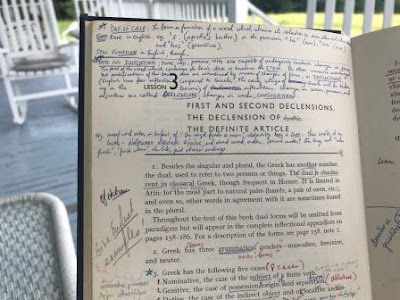