I can't believe I missed a day of blogging yesterday, but I was so busy that the day is just a blur. Life ever get that crazy for you? This morning I woke up planning to drive to the Blue Ridge Parkway and climb Sharp Top to see how my Lone Peaks 5s would work as hiking shoes, but the prediction for bad weather nixed that idea rather quickly. I don't mind rain but lightning and I just don't get along very well. But the Lord had even better plans. A day of perfection was kicked off with a fantastic run of 10 miles in Farmville which got me in the best possible frame of mind for the day. 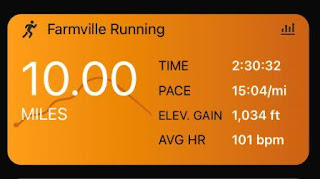 It was also good training for this weekend's race in Virginia Beach, called the Allen Stone Braveheart Run-Swim-Run. It's named for a Navy Seal who died during training and the proceeds go to the Virginia Beach Volunteer Rescue Squad and the Navy Seal Foundation. The race is kinda like a triathlon, of which I have done 5. 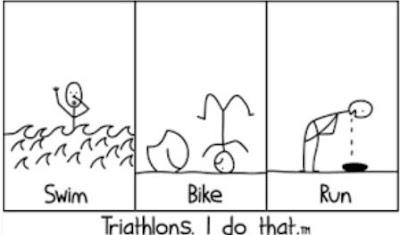 But instead of a swim-bike-run, it's a run-swim-run. First you run 1K on the sand, then you enter the ocean and SWIM 1K back to where you started, where you then run a 5K along the famous Virginia Beach boardwalk. Haven't done this race yet? What is your problem? This picture is from their Facebook page. 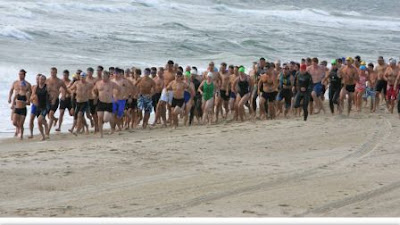 Strapping young athletes, eh? I enlarged the photo hoping to see someone over 50. Nary a soul. But I have been training hard and I need to trust that. True, I have never swam (swum?) a half mile in open water before (with who knows how many waves and surfers to negotiate), but hey, nothing in life is meant to be easy. Running seems to be pushing me in many different ways than I am used to nowadays, and that's a good thing. But no, I will NOT be going into this race with a sense of confidence. Trepidation is a much better word. It is important to try new things in life or else you will just get stuck in a rut. I guess I'll just have to throw it into grandpa gear and push as hard as I can.
Posted by Dave Black at 5:40 PM
Email ThisBlogThis!Share to TwitterShare to FacebookShare to Pinterest
Newer Post Older Post Home