I can totally get it when people say they don't like to run, especially when you have to get up early in the morning. I mean, who wants to see sunrises like this one? 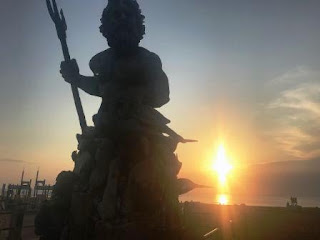 Of course, if you've ever been to Virginia Beach you recognize this as the one-and-only Neptune statue (aka Poseidon). He's supposed to be the god of the sea and the protector of those who venture out on her. Much good he did today.

As you know, I was in Virginia Beach to participate in the 22nd annual Allan Stone Memorial 5K and Run-Swim-Run. Allan Stone was a Navy Seal who was tragically killed during a training exercise. Today he was honored along with other Navy Seals who died in the line of duty. Officiating were these two Naval officers. 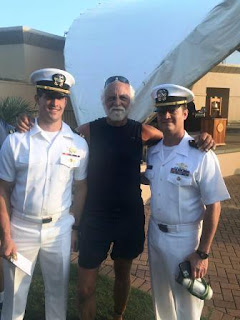 The one on the right, by the way, is a Navy Seal chaplain and was educated at Dallas Seminary -- and has taken classes at Southeastern! Before the races kicked off, we took a few moments to honor the dead. Here you can see family members -- spouses, parents, children -- of those we were remembering today. 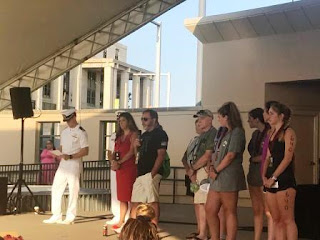 The names of their loved ones were spoken aloud, along with the names of all the other Navy Seals who gave their final measure of devotion for country and home. I don't think I was the only one who got choked up while their names were being read. Then the Seal Parachute Team landed on the beach just as the singing of the National Anthem came to a conclusion. More teared-up eyes. Before the race, the head of the Virginia Beach Volunteer Lifesaving Squad briefed the swimmers. 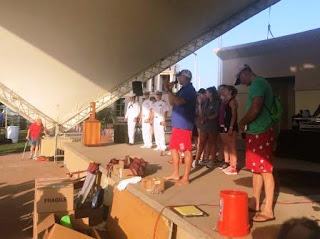 He made it sound like the swim would be a piece of cake and assured us that we'd be swimming with the current. Sadly, he was wrong on both accounts.
The races started with the Team Hoyt 5K. In case you don't recognize that name, Team Hoyt is named after Dick and his son Rick Hoyt. When Rick was born with a diagnosis of cerebral palsy, the doctors advised his parents to institutionalize him since they felt there was little to no hope of him ever leading a normal life. But Dick and Judy Hoyt had other plans. In 1977, Dick participated in a benefit run for an athlete who had been paralyzed in an accident. Dick pushed Rick in a wheelchair. Afterwards, Rick said to his father, "Dad, when I'm running, it feels like I'm not disabled." That was the beginning of a father-son racing career that topped 1,300 races, including 6 Iron Man competitions. You can read the story here. 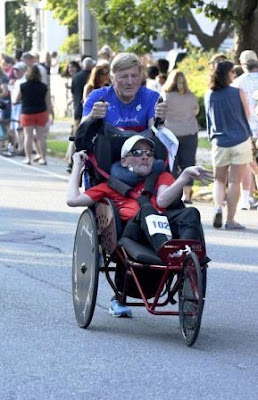 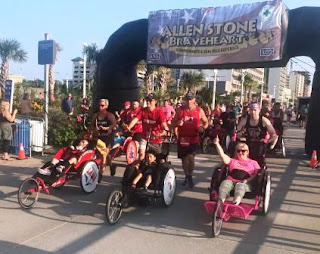 After that the non-swim 5K began. 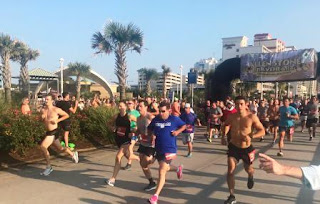 A few minutes later the rest of us walked down to the water's edge to begin a 1K run on the beach, a 1K swim back to where we started, and then a 5K race. To be honest, I went into the race with a sense of fear and trepidation. I mean, swimming for over a half mile in the open ocean? Really? I was surprised by my feelings since I am normally a person who loves to push the boundaries of the possible. After all, wasn't I born and raised in Hawaii? Hadn't I been a life guard and swimming instructor in California? Hadn't I surfed all my life? True. But since 1998 I've lived in Nelson (landlocked) Virginia, and if I did do any competitive swimming it was in a pool. Furthermore, hadn't we been told that we'd be swimming with the current?
When the run on the shore began I held back, hoping to save my strength for the swim portion of the competition. Sure enough, when we back-of-the-packers entered the water, the current seemed to be with us. But about half way I noticed I was barely moving. So was everyone else. Eventually a life guard paddled up and told us that the current had switched directions. We were now swimming against a strong current. The only thing we could do was move closer to the shore where the current wasn't as strongly felt.
Once we did that, we were able to make slow but steady progress, even though now we had to do battle with the breakers. I repeated my mantra "Through perseverance even the snail reached the ark" over and over again, keeping my eyes firmly planted on old Mr. Neptune. An hour and 20 minutes later, I emerged from the water to begin my 5K run. I quickly got over my sea legs and was able to pound out the miles in a nice time. By the time I reached the finish line the awards ceremony had been going on for some time, which was fine with me as I guessed they weren't going to give out awards for last place finishers any way. Here I am before the race, "exuding" confidence. Like my halo? One thing I know about myself is that I love new challenges. Today was such a day. Maybe I should have become a Navy Seal after all.
Mega kudos to Mike Wilson and his wife for putting on a fabulous, challenging, and memorable event. I noticed on their table that they had a Bible. It's difficult to find a better reason to run than such passages as Heb. 12:1-2 in the Holy Bible. And it seems so appropriate and fitting that a race should honor people for their courage and sacrifice -- biblical virtues for sure. The satisfaction that comes from a race like this one is deep and long-lasting, knowing that you pushed yourself way, way, way farther than you thought possible, and all for a good cause. These are the moments I will savor for the rest of my life.
Posted by Dave Black at 5:32 PM
Email ThisBlogThis!Share to TwitterShare to FacebookShare to Pinterest
Newer Post Older Post Home