Translating One of My Books into Modern Hebrew

There is absolutely nothing better than working with your translator on your latest publication via Zoom. This is the first draft of my book Seven Marks of a New Testament Church. 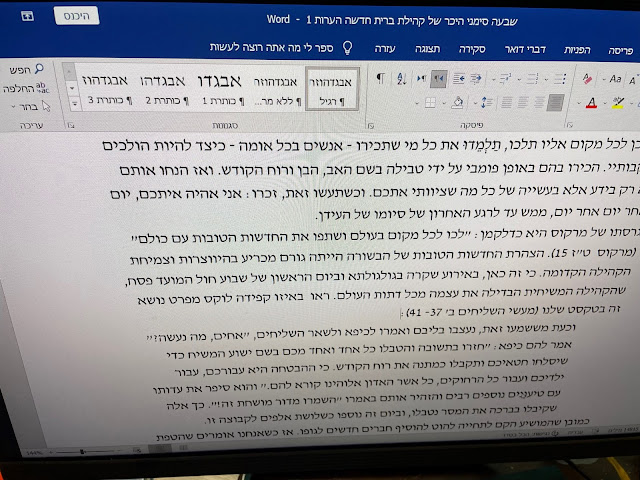 It is being translated into Modern Israeli Hebrew. It is already available in English, Spanish, Mandarin, and French. It is not the first of my books to be translated into Hebrew. The other is my beginning grammar, as there is a great need today for an introduction to New Testament Greek for the nascent Israeli Messianic communities.

Today I worked with my translator to improve the renderings and make sure that the words we use are understandable to readers in contemporary Israel. I find this really, really difficult. The problem is that most people could read a word-for-word translation pretty easily, but the translation will not seem "correct" to them because it fails to be idiomatic -- that is, it fails to read like natural Hebrew. Another problem is the syntax-semantics interface: in trying to maintain the semantics (meaning), you sometimes have to change the syntax (sentence and phrase structure). You are often forced to preserve one at the expense of the other, and I have never liked doing that, especially when I was producing the base translation for the ISV New Testament. Obstacles include a completely different alphabet, the context-heavy nature of Modern Hebrew, the distinction between second person singular and second person plural (whereas in English we only have "you"), as well great differences in syntax and sentence structure.

Hopefully, we've avoided most of the pitfalls involved, but I still struggle over the relative emphasis I would place on matching words exactly and staying true to the tone and spirit of my work. Honestly, English and Hebrew are very different languages in terms of basic grammar. This project has thus presented me with many interesting and engaging challenges.