Recently I've been struggling with a case of Achilles tendonitis in my right foot. I think it was caused by, let's say, overuse to a degree, in that since last June I've completed 3 triathlons, 3 half marathons, two 10-mile races, one 32-mile ultramarathon, and the Richmond Marathon a month ago.

Have you ever had tendonitis in your foot? It's not pleasant. You feel a distinct knife-like stabbing pain in your heel especially first thing in the morning. 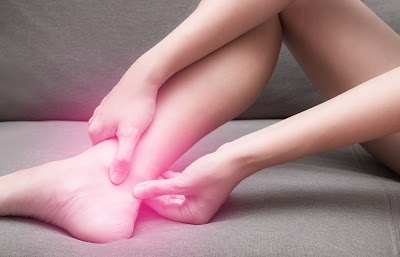 Now here's the interesting thing. Most of the time the real problem lies not in your Achilles tendon but in your calf muscles. If you test the calf flexibility on the side of the pain and determine that you have calf tightness, then you definitely want to fix it since that is almost always the root cause of your pain. The pain is coming from the inability of your foot to maintain a rigid position at the time you lift your heel off the ground to propel your body. This results in an enormous amount of stress being shifted to the fascia to do something it is not equipped to do. Simply put, your tight calves are creating a timing issue. A couple of weeks ago I began calf stretches and they have done wonders, so much so that today I was able to walk pain-free for the first time in months. I am blown away by how fast you can feel the difference in such a short amount of time. But you have to know what to strengthen.

Now, will you allow me to use this as an analogy to a problem we have in the church today, in particular the cancer of disunity? The solution is definitely NOT to be found in unity for unity's sake. This is the mistake of ecclesial ecumenism. If I can return to the book of Philippians for a moment, the case of Euodia and Syntyche (4:2) clearly shows that only where there is agreement on what the gospel is can Paul tell the church there is no room for personal disagreement. The most fundamental form of Christian unity is agreement on the gospel. This is because, for Paul, the most fundamental oneness is based on whether or not your name is written in the "Book of Life" (4:3). Only those who are "in Christ Jesus" in the heavenly realm can practice unity here on this earth.

This is precisely where ecumenism fails. Ecumenism always involves compromise with the gospel for the sake of greater unity. This is completely contrary to the apostolic mind. It is, in fact, a denial of the gospel. Paul describes as "dogs" those who add works in their teaching about salvation (3:2). He is being deliberately rude. Beware, says Paul. No one may detract from the sole sufficiency of Christ with impunity.

Those who corrupt the gospel are still with us today. I am referring to the pathetic multitude whose only confidence is in social justice and creation care. Where is propitiation? Where is sin? Where is repentance? Where is evangelical faith? Where is the repudiation of a works-based soteriology? In researching my book on the church/kingdom (Godworld: Enter at Your Own Risk), I did a study of modern ecclesiastical expressions of Christendom, including mainline liberal denominations. One of them recently held a conference on "evangelism." I watched the resultant YouTube where I discovered that this major U.S. denomination defines "evangelism" as "finding Christ in everyone you meet." This obviously constitutes a denial of the gospel, which itself is the only basis for ecclesial unity. The gospel is the Good News, and our salvation is built on the historic fact that Christ died for our sins and rose for our justification. We are saved when we trust a Person, the Savior, and confess him as Lord. This is precisely where some denominations make a fatal mistake. They give intellectual credence to the facts but they never commit themselves to the Person the gospel is all about. Men minimize false doctrine and try to see the good in what God calls evil under a mistaken notion of grace and tolerance. The love of God has been preached but not his holiness. However, striving to produce unity when the gospel you preach is a false one is simply trying to cure tendonitis without stretching your calf muscles. The age of "togetherness" is mired up in "compromise."

Paul and Silas were accused of troubling Philippi (Acts 16:20). What city in America today does not need to be troubled by the gospel of Jesus Christ? Only where there is such commotion will there be earthquakes at midnight and jailers converted.