As you know, ambiguity involves uncertainty about the meaning of a word or sentence. Some cases of ambiguity are easier to decipher than others:

Easy: "Call me an Uber, please." Here you're not asking to be called an Uber but for someone to call an Uber for you.

Hardest: "Do you believe in clubs for young people?" Someone once asked comedian W. C. Fields this question. "Only when kindness fails," he replied. Here "clubs" is ambiguous: Are "clubs" nightclubs or wooden bats? Similarly, Groucho Marx once quipped, "I shot an elephant in my pajamas." Of course, neither interpretation -- "I shot an elephant while I was wearing pajamas" and "I shot an elephant that somehow got into my pajamas" -- makes any sense, but that's precisely the point of comedy.

Here's a New Testament example of ambiguity. I ran across it while reading through Colossians yesterday in The Living Bible. 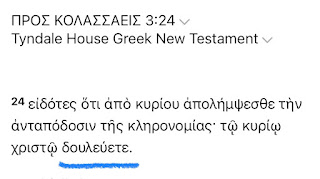 The Greek word douleuete is ambiguous. It can either be an indicative statement or an imperative command. Is Paul saying, "You serve the Lord Christ," or is he saying, "Serve the Lord Christ!"? Most English Bibles go with the former rendering (NIV, NLT, ESV, KJV, NASB, CSB, NRSV, etc.). Interestingly, however, I found two English translations that preferred the imperative here: Dan Wallace's NET Bible and the new Legacy Standard Bible. In Spanish, the LBLA has "You serve," while the Reina Valera 2015 has "Serve!" As for German Bibles, both Luther and Schlachter 2000 have "You serve," but the NGU and the Schlachter 1951 preferred "Serve!"

All of this is perhaps a good reminder of three things:

1) Always try and read several translations when studying a passage of Scripture. They will often make you aware of issues caused by ambiguity.

2) Also take advantage of the exegetical commentaries, keeping in mind that their purpose is not to do the hard work of exegesis for you but to serve as a wise guide on how to weigh the options.

3) Keep in mind that authors sometimes use ambiguity to allow readers to draw their own conclusions. An example that has tormented New Testament scholars for ages is the "faith of Christ" debate. 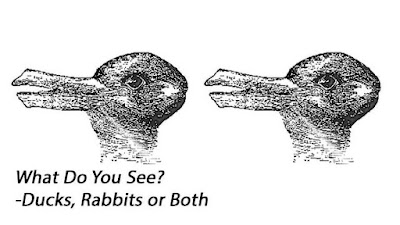