A Visit to Gettysburg and Sharpsburg

I'm back from Pennsylvania and Maryland. My main goal for this trip was to attend various and sundry talks at the Gettysburg Battlefield for the battle's 159th anniversary. Believe it or not, I had never before taken the time to attend these talks. I would recommend that to anybody. They are your typical battlefield talks, meaning they are generally well-researched, well-thought out, and well-presented. It helps if you have some prior knowledge of what took place from July 1 to July 3, 1863, but it's not essential. Somehow, battlefield guides are able to speak to both Civil War novices and self-styled Civil War experts.

My drive north took me first of all to Frederick, Maryland. I wanted to visit Prospect Hall, where Meade formally became commander of the Army of the Potomac, replacing Hooker. 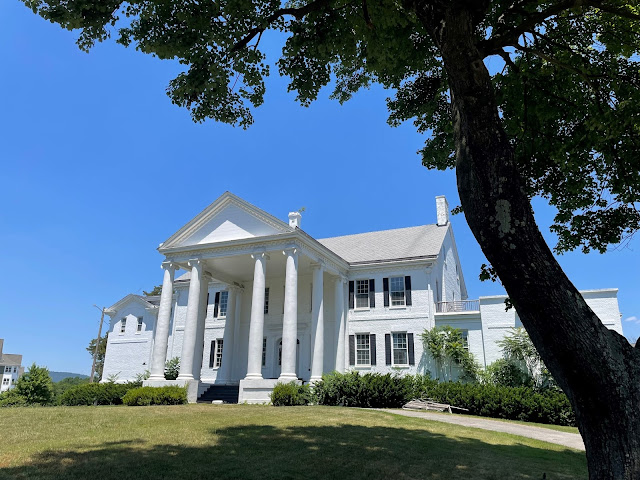 From there it was a short drive into Pennsylvania. My first stop was the HQ of General John Reynolds, commander of Meade's left wing. 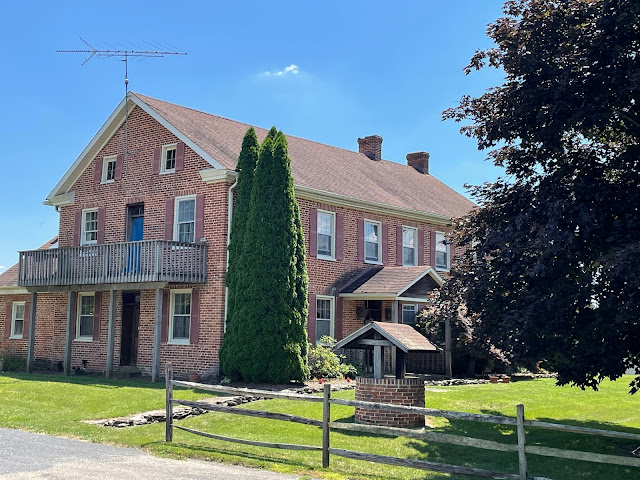 It is located 11 miles south of the town of Gettysburg on Marsh Creek. Meade's desire was to gather as much information as possible on the enemy's whereabouts and intentions before giving battle. To do this, he needed to force the enemy to concentrate and deploy. Thus Meade ordered Reynolds and his First and Eleventh Corps to perform a reconnaissance in force but not to bring on a general engagement. It is hard to conceive of a more complex or dangerous operation. Below, of course, is the location in Gettysburg where Reynolds met cavalry General John Buford on the morning of July 2. 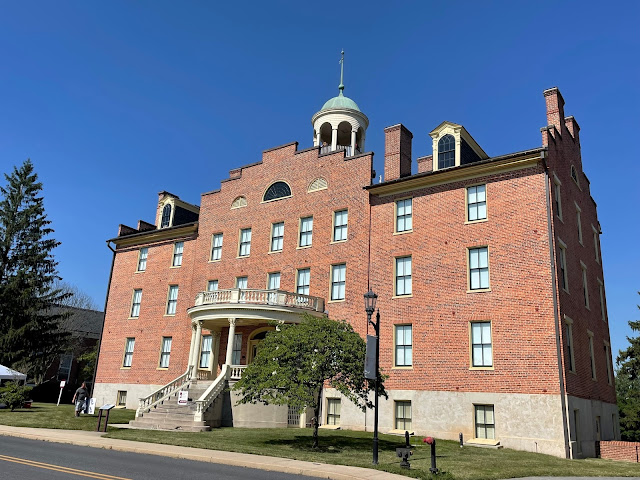 It's really hard to take a bad picture of the Lutheran Seminary and its famous cupola. At this point I grabbed some chow and checked into my hotel room. After that it was back to the seminary for a lecture about the role the 107th Ohio played in the battle. This regiment was made up of German immigrants to the United States. Would it surprise you to know that about 43 percent of all Union soldiers were either immigrants themselves or sons of immigrants? It surprised me. 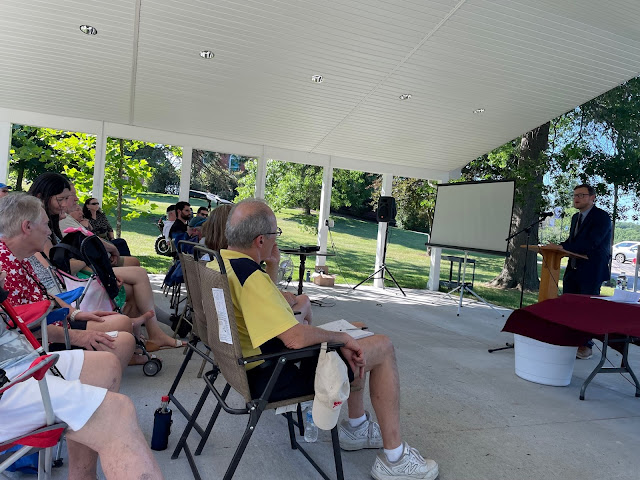 The day ended with a drive along the edge of the battlefield. 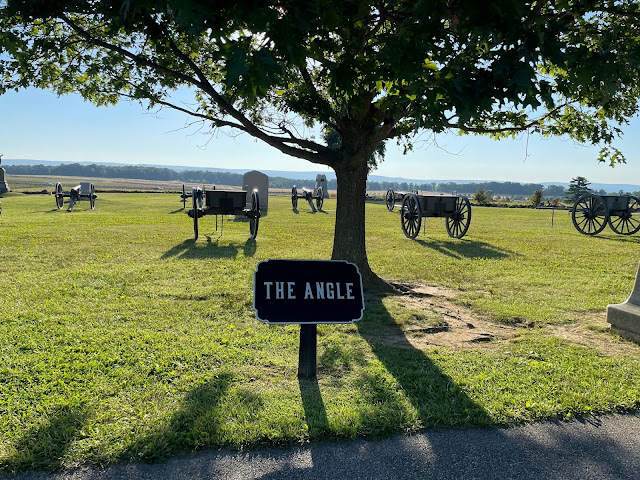 I don't know about you, but I never tire of seeing the Round Tops again. 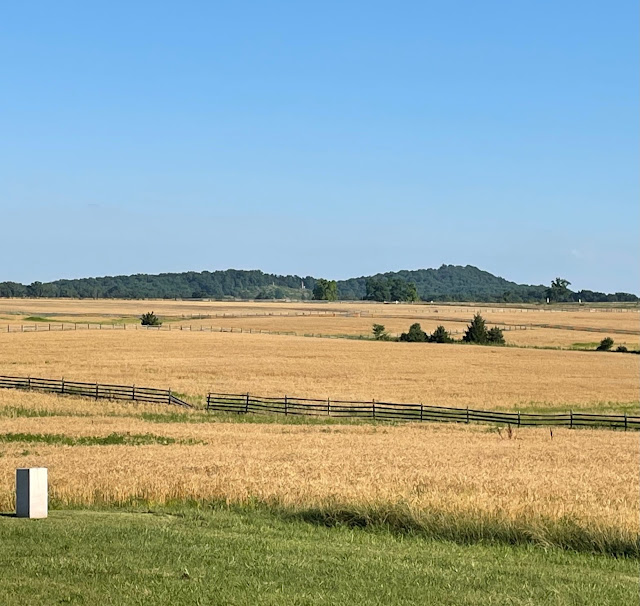 The next day, Friday morning, it was time for my second talk at the seminary. Before it started, I made sure to get a photo of Lee's HQ on Seminary Ridge. 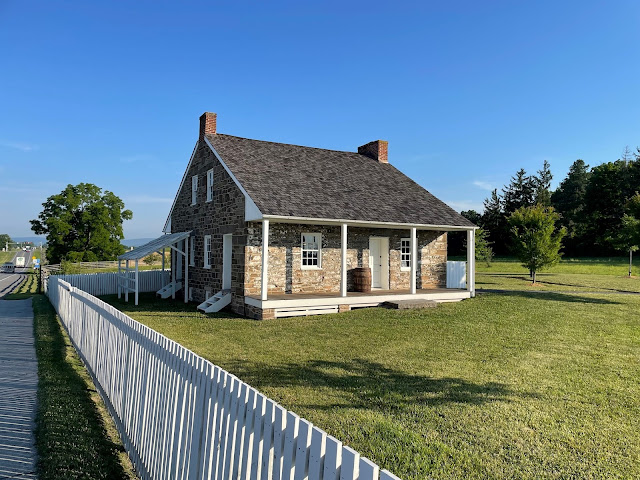 I also visited Meade's HQ on the Taneytown Rd. 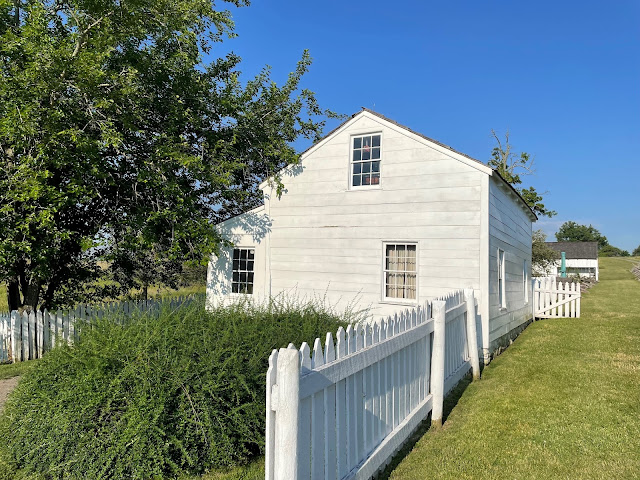 This is where Meade and his generals made the decision to stay and fight it out at Gettysburg rather than retreat to Pipe Creek. 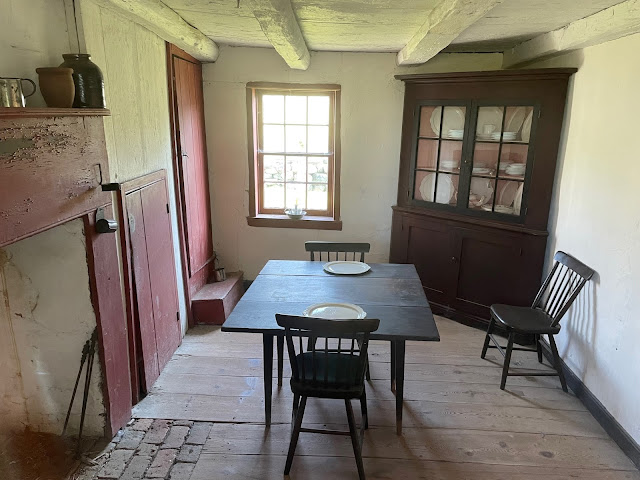 Back at the seminary, I was treated to an excellent lecture about where John Buford and John Reynolds met and what they talked about. Like many things about the war, these matters are hotly debated. The available evidence suggests that Reynolds first met Buford at the seminary (and not on McPherson's Ridge), as depicted in the 1993 movie Gettysburg.

Talk #2 done. What next? Get in a workout at the local Y, of course. 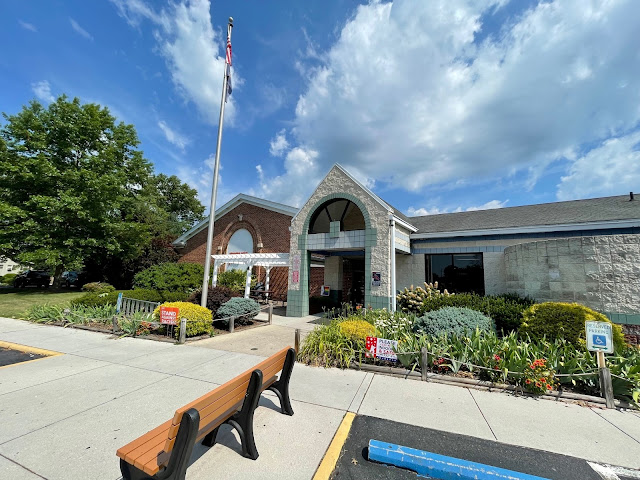 From there I drove to Herbst's Woods (also known as Reynold's Woods) to hear a park ranger give a talk about the death of General Reynolds while he was leading a regiment into battle. 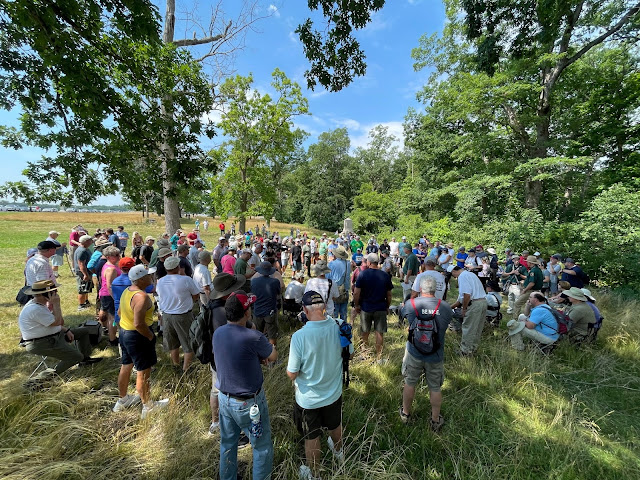 Then it was time to put on my running shoes and do something I have always wanted to do -- run the battlefield. I began my run on Confederate Ave. 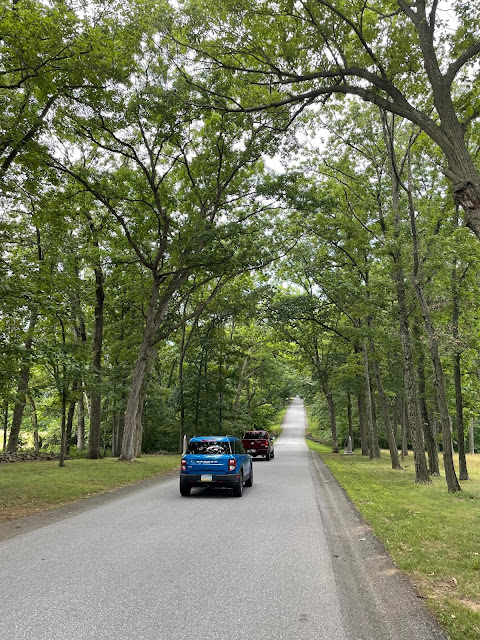 Then I ran across the field of Longstreet's Assault to the Copse of Trees. 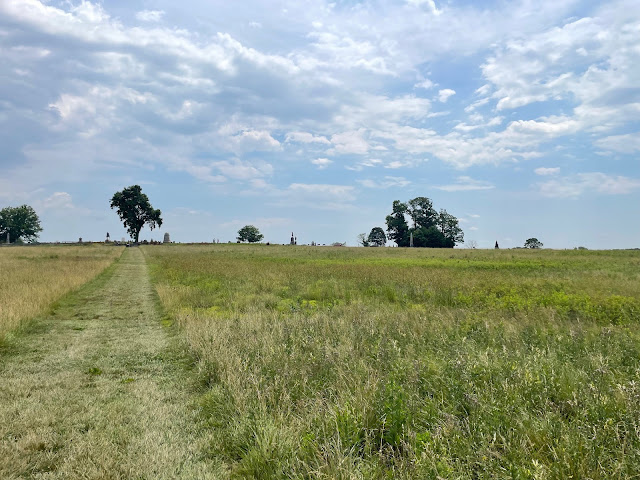 From there, Hancock Ave. beckoned. 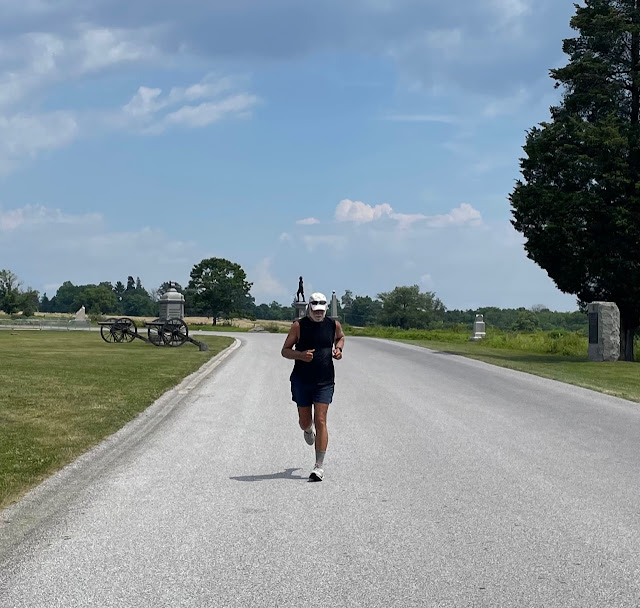 I didn't take the time to stop at the many monuments along the way though I should have. There are 1,500 of them. 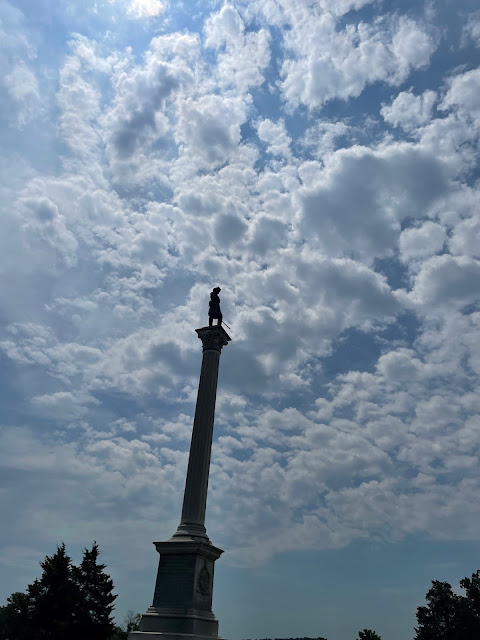 To end the day I drove over to York to have dinner with an old friend of mine. Chris pastors a Brethren church near Lancaster. This guy is amazing. Not only is he an ultramarathoner, he's even won one of his races! 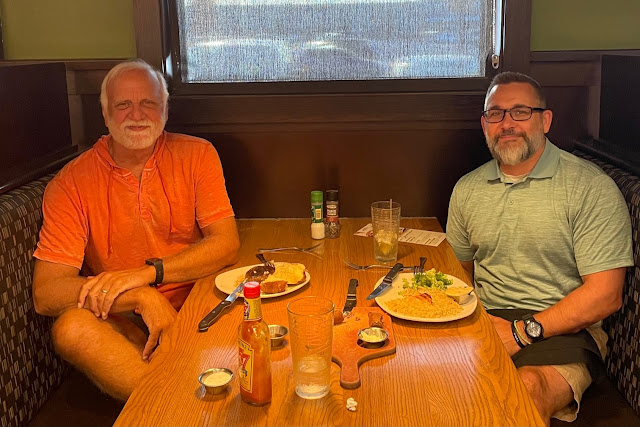 And so day 2 of my vacation came to an end. 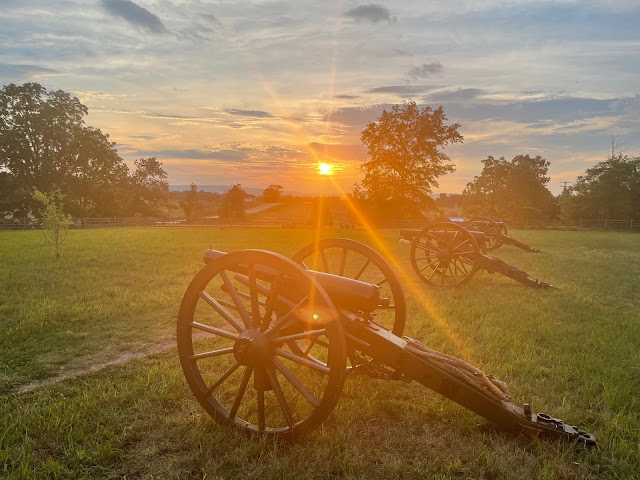 The first (of two) talks I attended on Saturday was at the Lee HQ building. The speaker struck the perfect balance between TMI and simply regurgitating facts everyone knew. Speakers need to work continually to keep their audiences engaged. This one succeeded. 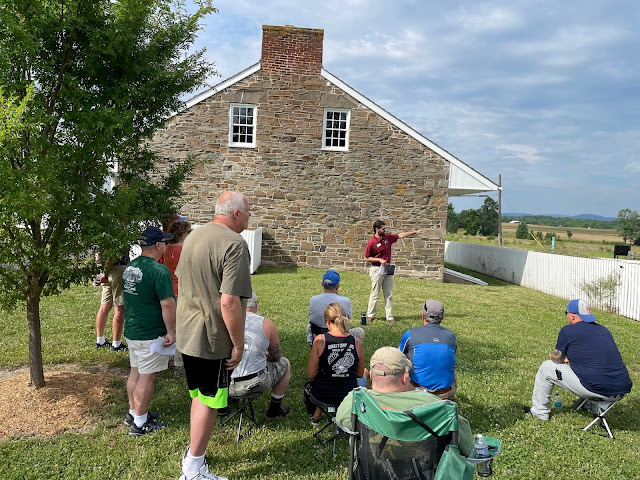 After that, I had about an hour to kill, so it was off to Cemetery Ridge to finish reading my book about Meade in the shade of one of its monuments. 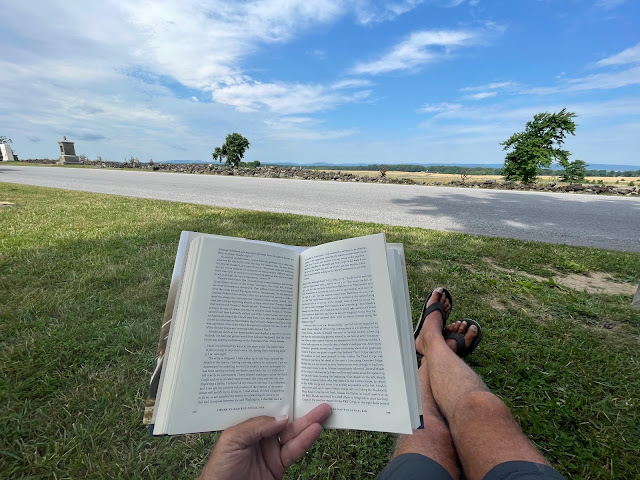 When the park ranger arrived for his talk, he painted a fascinating picture of Longstreet's Assault, replete with detail both geographical and biographical. I tell you, these speakers know their subject matter. 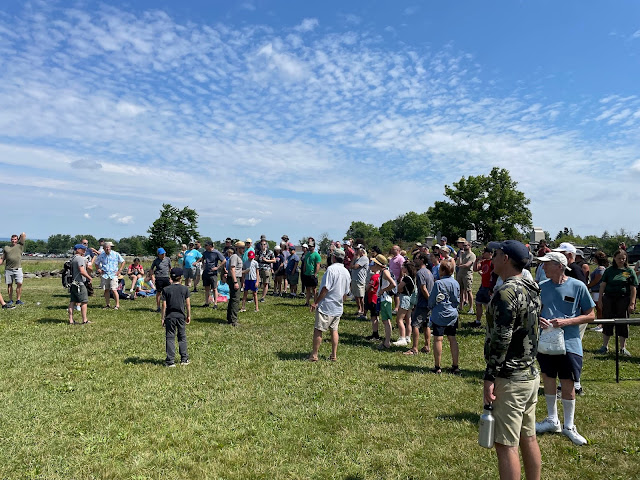 Now, if you're wondering what my own family was doing during the war, the answer is found in my final stop of the day -- the Antietam National Battlefield in Sharpsburg, MD. Thus far I've been able to trace my paternal great-great-great grandparents to the John Miller family, who "lived on a creek in Western Maryland called the Antietam." This, of course, is none other than the site of the single bloodiest day of the Civil War on Sept. 17, 1862. 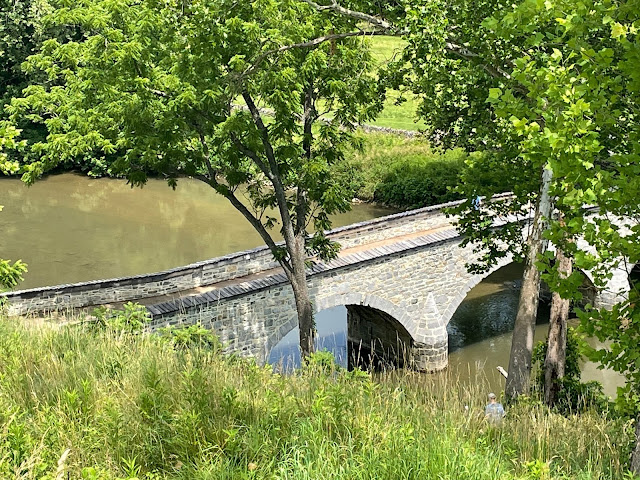 John Miller and his kin were German Baptists and thus were pacifists, as were many of the German settlers in the area. 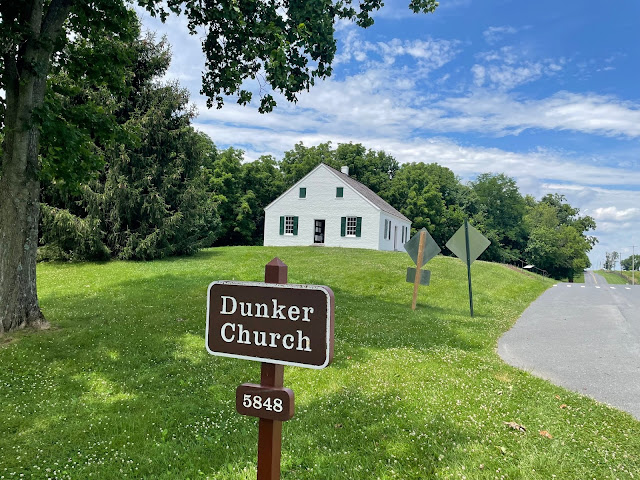 Here's the famous Miller Cornfield where the battle began. 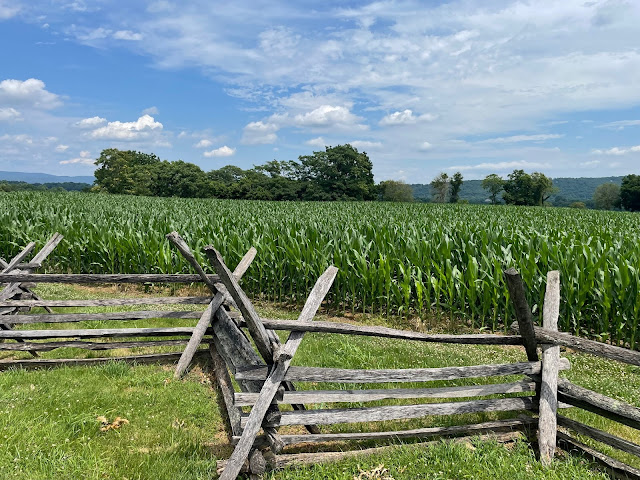 And who will not recognize the Sunken Road? 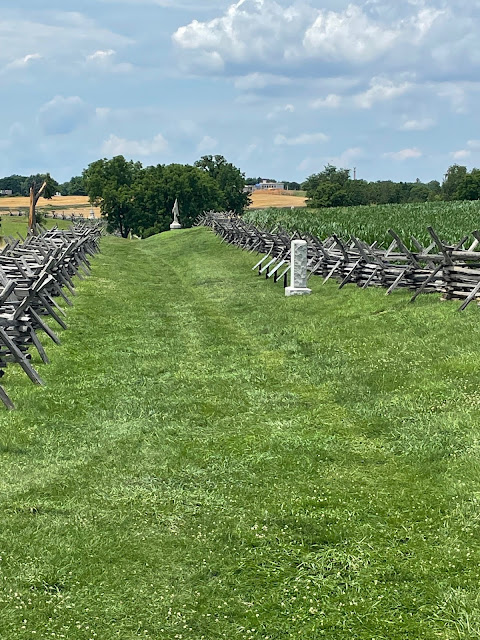 The Poffenberger Farm looks almost exactly as it did 160 years ago. 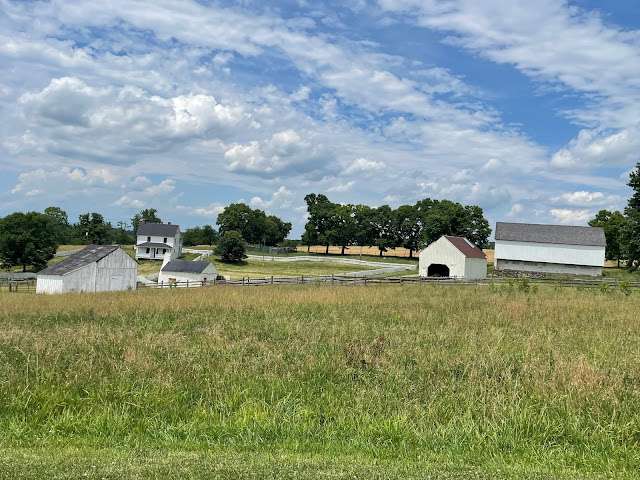 But of course, my favorite site on the battlefield is the David Miller farm. 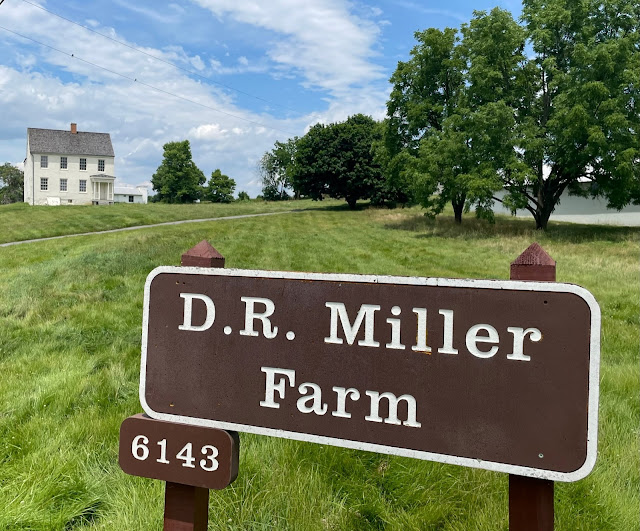 My guess is that David and John were brothers, but I haven't been able to document that yet.

To wrap things up, I'm always pleasantly surprised that I'm able to see so many new things every time I visit one of our nation's battlefields. The United States didn't just "happen." We find, in the echoes of history, lessons of almost eternal durability and significance about freedom, citizenship, and leadership. The speakers I heard this weekend were able to draw invaluable lessons from the battles and leaders of the Civil War and apply those lessons to today. That's perhaps the main reason I like to attend these events and to travel to historical (and historic) sites in our great nation. America has never been perfect. But its history is replete with lessons to be learned. Which is one reason I'm determined to visit, in person, every one of our 50 states. So far, 49 down. Only Alaska eludes me.

Thanks, Lord, for allowing me to take this mini-vacation. What an amazing land I live in. Friends, let's be grateful for our nation. It's the home God's given us. I didn't do anything to become a citizen of this nation. I was just born here. Even when America doesn't live up to its ideals, we can make it better. That's why the prayer in "America the Beautiful" is so appropriate: "America, America, God mend thy every flaw."

Thanks for reading, and a blessed Fourth of July to you and yours.