My Surfboard (and Its Shaper)

I got SO MANY comments about my board while at Virginia Beach. The surfers there really liked it. 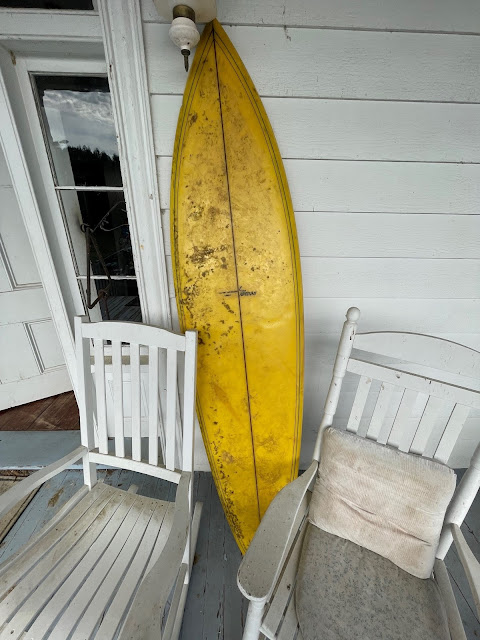 This is one of several boards I owned while living in Hawaii. One of them I broke in half at Pipeline. So I had this one made. Here's what I think is is an interesting factlet. The guy who shaped the board for me is named Bill Stonebraker. 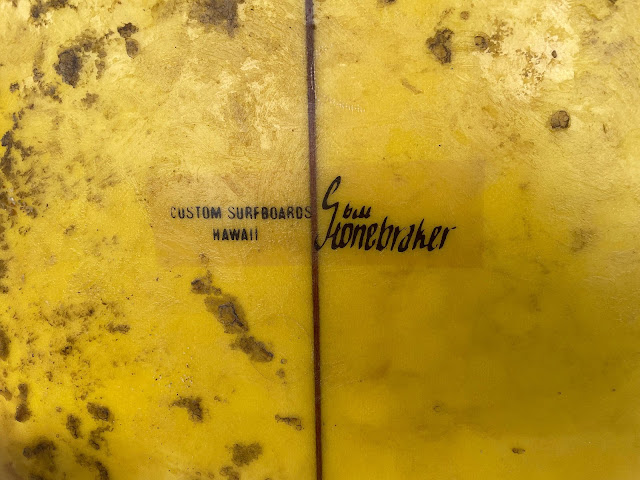 I designed the board to be what we call a "semi gun" -- a board suitable for medium sized waves (5-10 feet) but also for control and speed while surfing larger waves (10-20 feet). Semi guns are narrow both at the nose and tail, thus giving the rails enough contact with the wave. They are also long and extra thick to prevent wobbling. This makes turning your board a little bit cumbersome -- which is the problem I had this week because the waves were on the small side (2-4 feet). You can't fail to notice the rounded pin tail of the semi gun. A reduced tail region is crucial when riding bigger waves since it allows the tail to be buried in high speed turns. Semi guns are rare on the East Coast because, well, the surf rarely gets much over 6 feet. I wish I still had one of my chunky old longboards, which are ideal for 2-4 foot waves. Maybe I'll rent one the next time I'm in Virginia Beach. I'd probably be able to drop in on more waves and get longer rides with a longboard, which is what most of the guys and gals had.

Back to Bill Stonebraker. In the 70s, he was the go-to guy on Oahu to shape your board. And get this. He now pastors a church on Oahu doing what he loves -- teaching the Word of God and ministering to others. To God be the glory!