Imagine a group of guys and gals, all strangers, coming together to bust their buns running a twisty-turvy, up and down trail run over rocks and roots and fallen trees. 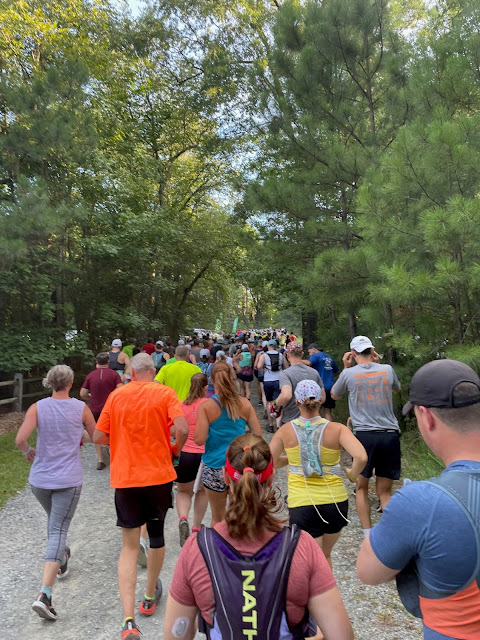 These runners are all here for the same purpose -- to test their mettle not only against a really tough course but against the curse of all July races -- humidity. As in 100 percent humidity. Okay, it wasn't raining, so it probably wasn't actually 100 percent. But it sure felt that way.

I'm not sure how this race first piqued my interest. Maybe it was because I was getting burned out on triathlons. Or maybe I just needed to see if a 6 foot 4 klutz could run a trail race without face planting. All I know is that I was up and at 'em at 5:30 this morning, dead serious about not only completing this race but competing in it. That's right. I said it. The "C" word. We live in a crazy time. We're not supposed to be competitive lest we offend somebody. Competitions can result in lower self-esteem because 90 percent of people don't get recognized, and if they don't get recognized they could experience fear and anxiety. Good grief. Competition is a part of life, so we might as well harness it productively.

Despite the Declaration of Independence, we are not all created equal. I will never win the Boston Marathon. I will probably never even quality for it, try as I might. You and I are surrounded by people who know more, do more, and make more than we do. Who cares? Live up to your potential! For most of today's race, I was striving to come in first place in my age group. Yes, the competitive juices were in overdrive. I would either win my division or die trying. Can you visualize it? My legs are heavy. My lungs are heaving. All around me are runners engaged in the same struggle. I am pushing myself as if my life depended on reaching the finish line ahead of the two other men in my age group. I am running at about 95 percent of my maximum oxygen capacity. Today I raced, I didn't just run. And I raced at the very edge of what I could handle. At mile 2 or so I fell in behind this guy and he paced me for a while. 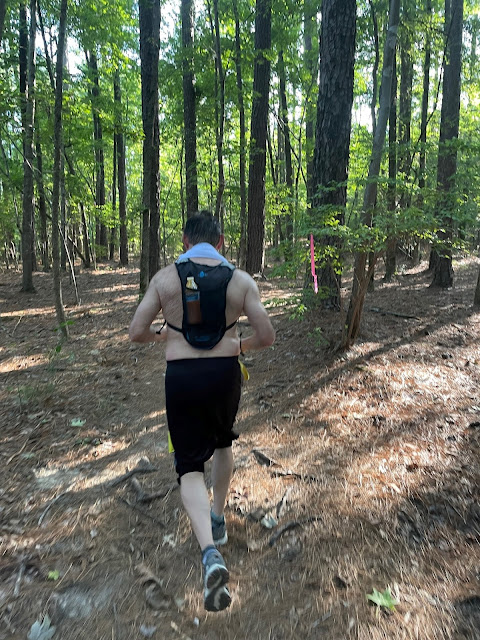 Then he succumbed to the humidity and I passed him. Later I was passed by these two women.

They became my new pacers and somehow I managed to stay with them until the end. I was running against the absolute best I could do, not just competing for myself but competing for a prize. 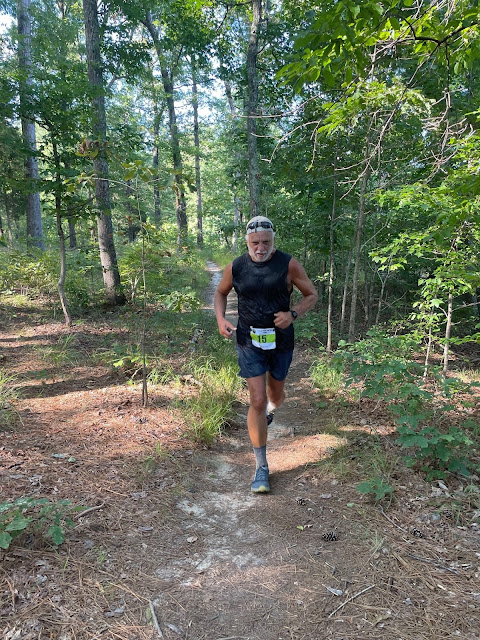 When I finished, I was overwhelmed by a sense of unadulterated joy. The race was a great experience -- the sensation of speed, the expenditure of total effort, the competitive spirit I saw in myself and in others. In the battle for first place, my basic strategy was to go out easy, find my rhythm, then hit the afterburners in the last mile. I entered the later stages of the race knowing that I was giving it everything I had. A half mile from the finish I pulled the trigger, going as fast as I could.

When I crossed the finish line, I was totally expended though also elated. My body had attained an efficiency that my mind could not comprehend. I let myself wander over to the results booth. I had finished in second place, 4 minutes behind the first place finisher in my age group. I'm not going to pretend that I wasn't disappointed. I felt like Sisyphus, forever pushing the stone yet never arriving at the goal. But that feeling lasted for only a minute. There was a battle to be fought, and I had fought it bravely.

That's life. Each day that we live, there is a victory to be won -- and a defeat to be risked.

Millions of Americans take to the roads or trails every year seeking to be their best. "The athlete instantiates the man," wrote the philosopher Paul Weiss. "I am proud to be of this breed." Every race day is a day in which I give special thanks to God. A trail race is a good place to become, if only for an hour, the person you are meant to be.

Each of us must have a mountain to climb, even if it looks no larger than a hillock. To live a meaningful life, we need to have meaningful goals. Perhaps that's what Jim Elliott, the martyred missionary to the Auca Indians, meant when he said, "Wherever you are, be ALL THERE, and live to the hilt whatever you are convinced is the will of God for your life."