This morning's workout at the Y involved some basic upper body work. 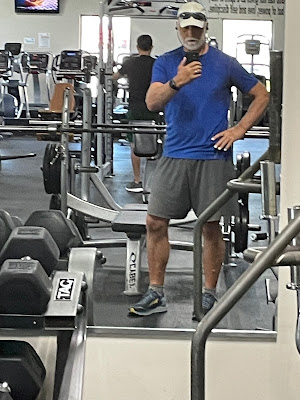 As I lifted, I listened to C. S. Lewis's Mere Christianity on audio book. Lewis was one of the first Christian authors I read after my conversion. I've been fascinated with him ever since. I think people will still be reading Lewis 50 years from now.

Today I am researching races for 2022. For a runner, a race that you've signed up for is like a carrot. It dangles in front of you. You find yourself pursuing it, and it becomes the single most important motivator to get out there and train. I believe it was Aristotle who said, "Half the fun of racing is training for it." Okay, maybe it wasn't Aristotle. The point is: If you're a runner, you love having specific race goals. Being a competitive runner and not signing up for a race is like talking during the playing of the National Anthem. Just ain't right.

Technology, by the way, is a wonderful thing. On the Web you can stay abreast of all the marathons, ultras, etc. for the coming year. In general, I try to plan out my race schedule before the new year begins. Not the 5Ks and 10Ks, of course. But certainly the "peak" races. Which ultra shall I do in 2022? Which marathon(s)? Then I get these races on the calendar. This is not to say you can't change your mind later on. This year, for example, I ran the Richmond Marathon instead of the Flying Pig in Cincy, even though I was already signed up for the latter. In short, my philosophy is: Having races on the calendar is best. So is staying flexible.

One of the beautiful things about the marathon is its universality. Every state in the Union has several of them each year. That's pretty awesome. So there's really no excuse not to find one and at least pencil it in.