The Textual Basis of the Lord's Prayer -- Does It Matter?

When it comes to English Bible translations, there's something we don't often think about. This may surprise you, but the biggest difference between English translations of the New Testament is not the English at all. It's the underlying Greek text. Not all major English translations of the New Testament use the same textual basis. I've discussed this in detail in my chapter on textual criticism in my forthcoming book How to Make the New Testament Come Alive! Suffice it to say here that the two most widely used Greek texts are those representing (1) the Alexandrian text on the one hand, and (2) the Byzantine text on the other. If you want to see how these Greek texts differ in English, just compare the ESV with the NKJV. In places where the Greek manuscripts differ among themselves, the ESV and the NKJV usually end up on completely opposite sides. The good news is that both translations are usually careful to put the other reading in a footnote, thus informing their readers that textual variation has occurred in the passage.

A good example of this is the passage I was studying this morning in my personal Bible time. It's the version of the "Lord's Prayer" we find in Luke 11:1-4. 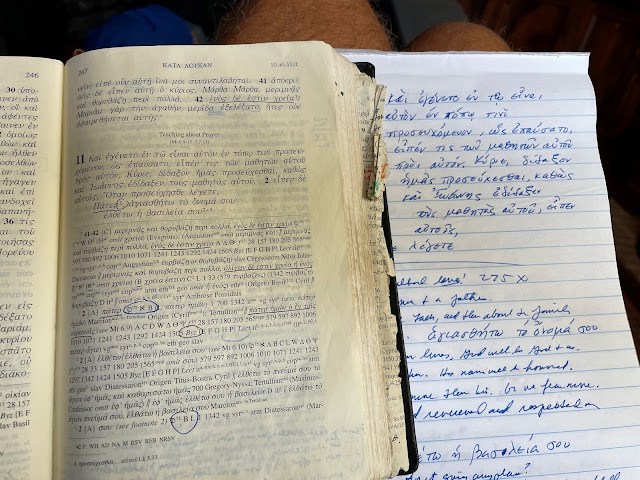 This version of the prayer differs considerably from the one in Matthew that we are more familiar with. Luke's version (based on the standard "critical" Greek New Testament) reads as follows in the ESV:

Father, hallowed be your name. Your kingdom come. Give us each day our daily bread, and forgive us our sins, for we ourselves forgive everyone who is indebted to us. And lead us not into temptation.

Here's the NKJV's rendering of the very same prayer but based on a different underlying Greek text (I've bolded and underlined the major textual differences):

Our Father in heaven,

Hallowed be your name.

Your will be done

On earth as it is in heaven.

Give us day by day our daily bread.

And forgive us our sins,

for we also forgive everyone who is indebted to us.

And do not lead us into temptation,

But deliver us from the evil one.

Now, some of the differences between the ESV and the NKJV have nothing to do with textual variation. They are simply a matter of the translator's preference -- as for example, the ESV's "each day" versus the NKJV's "day by day." But the vast majority of the differences have to do with the base Greek text used. Now, as I look at the textual evidence, I believe a fairly strong case can be made for the wording found in the NKJV. It's readings have broader geographical attestation and are as early as those found in the ESV. But right now that's neither here nor there. My point is that it's unlikely that we can arrive at a sound understanding of modern Bible translations without at least a basic knowledge of the art and science of textual criticism. I have already written a couple of books on this subject, but I'm not the only one of course. What you need is a basic overview of the subject, not a dissertation. From there you can go on to more advanced works if you feel led.

But what we can't do is remain oblivious to these differences in our English Bibles. They are too significant to allow us to do that.