Kudos to the NKJV!!

Bless the Lord, oh my soul, and all that is within me bless his holy name! Once again I saw something in Greek I had never seen before. Today I was in Gal. 4. 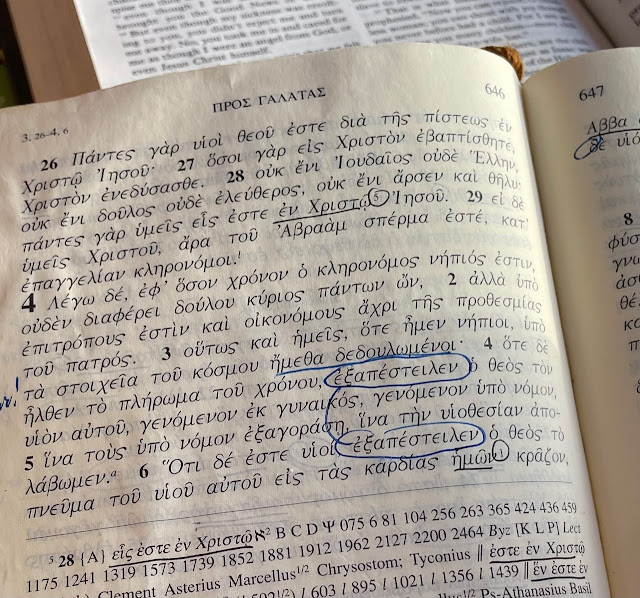 See those circled words? It's obvious they are identical. They are the same tense, the same voice, the same mood, the same person and number, and they share the same source. This really stands out in Greek but not so much in English. The first thing I want to say is that the basic idea of the verb is not simply "to send" but "to send forth." In other words, when you attach a preposition to a verb, that preposition often adds to that verb's meaning. However, not all English versions render the verb as "sent forth." Many simply use "sent," which is the "simplex" form of the verb rather than the "compound" form. Secondly, even versions that do translate the first occurence of the verb as "sent forth" in verse 4 fail to render its second occurrence in verse 6 the same way. Here's a chart for you to consider:

Then I saw this:

Plain enough, right? Isn't God beautiful the way he so plainly puts down in his word the source of both the Son and the Holy Spirit? The most beautiful part about this, however, is neither the Greek nor the English verb but the truth that the one whom God sent forth for our salvation was perfectly qualified to do so as his Son, and that he also sent forth his Spirit that we might have an experience of that great salvation.

Kudos to the NKJV translators for making this so plain!