What Is YOUR Diakonia?

This morning I had a great conversation with a good friend who lives in South Boston. He's a bi-vocational elder/pastor in one of our Mennonite congregations. Here's the passage we discussed. 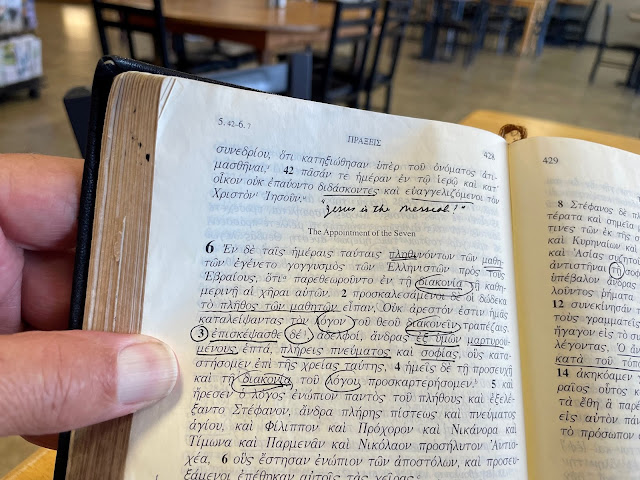 In Acts 6:1-6, the lessons are obvious. God calls all his people to ministry. The word diakonia, used in verses 1 and 4, is a generic word for "ministry" or "service." And we are all called to such diakonia. We are all called to give our lives in service to God and others.

This passage also teaches us that God calls different people to different ministries. It's obviously deliberate on the part of Luke that the work of the 12 and the work of the 7 are both called a diakonia. The 12 were called to the diakonia of the word, that is, to pastoral ministry. The 7 were called to the diakonia of tables, that is, to social ministry (caring for widows). Neither ministry is superior to the other. Neither is inferior to the other. Both of them are Christian ministries. Both are ways of serving Christ and his people. And note -- both require spiritual people to engage in them.

My pastor friend and I rejoiced that all Christians are called to ministry. But there is a wide diversity of gifts and ministries. Some serve spiritual food to people. Others serve physical food to people. And while this fact is made plain in the Greek text of Acts 6, the same cannot be said of English translations. This is exceedingly unfortunate. As you can see, only the NASB, by using the term "serving," comes close to connecting the diakonia of verse 1 with the diakonia of verse 4. 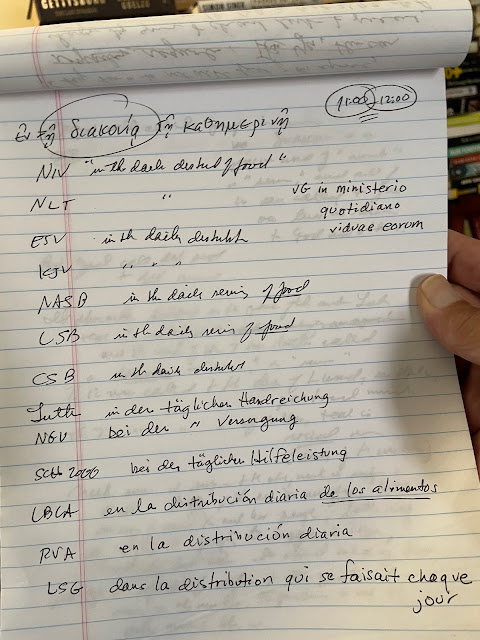 Oh, the Vulgate gets it right:

But other than e pluribus unum and et cetera, I'm not holding my breath that many Americans can read Latin. Maybe we should just all learn to read Greek. (*Gasp*)

My point is that if you are a Christian and do not experience the delights of being involved in ministry, you're missing out on one of the greatest privileges we have as believers in this life. I long to communicate to every person I can that the living Lord has designed a way for you to serve him and others. And because he is the originator of the idea of diakonia, I can declare without reservation that he is willing to show you exactly what that is.