What Have We Done with Such a Great Privilege?

There is a real danger that my life-long work of preparing pastor-teachers for their ministries could give the impression that I believe that they are the only significant people in the church who build up God's people. In point of fact, the ministry of pastor-teachers is designed by God to be the catalyst that enables others to do their part. This is the logic of Eph. 4:11-13. How is the body of Christ to be built up? How does it come to maturity? This happens when all God's people are doing ministry. Pastor-teachers play a crucial role here, yes, but not at the expense of others. It is not only a special group of people who are "ministers." All of us have a responsibility. This is how the Bible expects churches to be built up. So while there is certainly a need for gifted leaders to be set apart for pastoral ministry and other forms of leadership, the growth of the church does not depend on them alone.

When the printing press was invented, the first book to be published, as you know, was the Bible. Within three decades, the Bible had been printed in German, Italian, French, and Spanish. These translations used as their base, not the Greek of the New Testament, but a fourth century Latin Bible called the Vulgate. Still there existed no Bible in English.

In 1516, Erasmus published a Greek New Testament in Basel. In England, a young theology student named William Tyndale absorbed Erasmus's New Testament and then went off to Germany to embark on his life's work of translating the Bible into English from the original Hebrew and Greek. In 1526, Tyndale's English New Testament was published, and thousands of copies found their way into England. 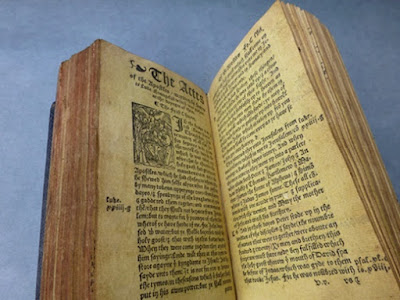 The church bishops banned it from England and even took to burning Bibles when they found them. Lay Bible reading, they felt, would only undermine the institution of the church and threaten its power base. Official persecution of those who translated and distributed the Bible in English soon followed.

Did persecution stop the Reformers? Hardly. They firmly believed that Scripture is God speaking. The Scriptures were breathed out by him. He is a revealing, understandable, God. Thus Tyndale and his followers wanted ordinary people to be able to hear God speaking for themselves and not have to go to a priest or a bishop to tell them what God is saying. Zwingli, another of the great Reformers, argued that Christ rules his church through the word, not through the pope. The Bible, not the church, is the master. 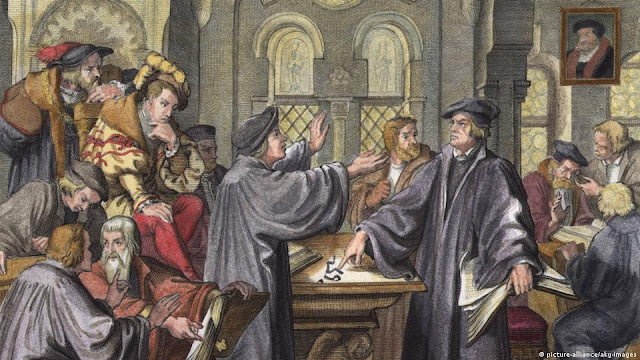 The Reformers insisted that Scripture is not just God speaking but God speaking supremely. This didn't mean that people were not to read commentaries on the Bible. The Reformers were famous for producing such works. But they would have been horrified if people paid more attention to Christian books than the Bible itself.

With the publication of the Bible in the vernacular, private Bible reading became a feature of ordinary life. Butchers and bakers began to read and discuss the Bible, coming to their own conclusions about what it taught, even daring to disagree with the clergy over it. The priest could no longer pontificate unchallenged. Sola scriptura meant more than merely "the Bible alone." It meant that the Bible trumped all other authorities. The Scriptures, and the Scriptures alone, are the supreme authority. The church therefore cannot order anything contrary to God's word. The ultimate authority is the Bible, not the priest or the pope.

Alas, it is blatantly obvious today that there are more popes than the one in Rome. And it is not just the Roman church that needs reformation in its ideas about the Bible. I have been instructing pastor-teachers for over 4 decades, showing them how to exposit the Bible with integrity, authority, and credibility, but evangelical pulpits are not substitutions for the Holy Scriptures. Not long ago I visited a church where the Bible stayed closed in people's laps during the sermon. But keeping the Scriptures open -- keeping them supreme -- is the only way to keep reforming the church. If the Bible says it, that's where we are to go. If the Bible forbids it, we dare not go there.

Many years ago I sat on the committee at an institution (that shall remain unnamed) which examined a doctoral student in New Testament to see whether he was sufficiently prepared to begin writing his dissertation. There were three examiners. I went last. The first two examiners were quite thorough in their questioning. The student was asked a number of important questions about the synoptic problem, textual criticism, pseudonymity, verbal aspect, and the like. When my turn came, and feeling that the main technical questions had already been posed, I took a different tack. "I will recite to you 10 verses from the New Testament, and I would like you to kindly tell where that verse is found in the New Testament," I said. The first verse I quoted was, "Therefore, having been justified by faith, we have peace with God through our Lord Jesus Christ." The student replied, "Ephesians?" Then I quoted this verse: "I am crucified with Christ, nevertheless I live, yet not I but Christ lives in me. And the life that I now live in the flesh I live by the faith of the Son of God, who loved me and gave himself for me." "Romans?" said the student. Of the 10 verses I quoted to him, he got only one of them right. He failed the exam, for I did not think it was a good idea to grant a Ph.D. in New Testament to someone who knew everything about the New Testament but did not know the New Testament itself.

The Bible was given to us as our supreme authority. It is God speaking to us, not only in Hebrew and Greek, but in our own language. What have we done in our personal study of the Bible? What have we done with such a great privilege?