Taking Verses out of Their Context

Have you ever taken a Bible verse out of its context? I imagine we've all done this from time to time. Many of us are in such a hurry to apply the text that we rush ahead and overlook the step of careful observation. Carefully observing both the historical and literary context is always the first step of studying the Bible. Hence I always try to impress on my students the need for contextual interpretation. I do this both in the classroom and in my books like New Testament Criticism and Interpretation, Interpreting the New Testament, and Using New Testament Greek in Ministry. 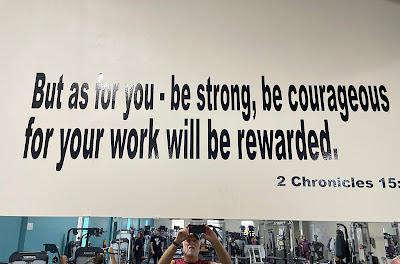 It's obviously taken out of context. I could have shown you pics of other verses as well. As a runner, I can tell you that another verse that's often taken out of context is Phil. 4:13. In fact, when you attend a marathon expo to pick up your race bib, there's usually a booth there hosted by a runners organization called "Team 4:13." It's a resource for Christian marathoners.

Again: what to do? Might I suggest what NOT to do? There's no need to talk to the gym staff or the booth personnel at the expo about their lapse of exegetical judgment. They mean well. In fact, I would suggest it takes a lot of guts these days to actually post Bible verses in a YMCA, despite the fact that the "C' in the name means "Christian." Likewise, I have come to deeply appreciate the presence of a Christian organization at marathon expos and I try to do what I can to encourage them. I've even bought their merch and worn their bracelet around my wrist during races. Maybe, just maybe, a fellow runner might stop and ask me, "What does Team 4:13 stand for?"

I once watched a YouTube video in which the speaker bemoans how often Phil. 4:13 is taken out of context by athletes and what a proper application of that verse might look like. There's certainly a place for that. Let me remind you: When we seize isolated verses without having a bigger picture of how they fit with the rest of the passage, it can often lead to error. If you wish to become a serious student of the Bible, you will always try not to isolate a verse of Scripture from its context. But it's equally important to to be men and women of grace.

That's it for now. Whatever you do today, do it for the glory of God. I'll try and do the same.