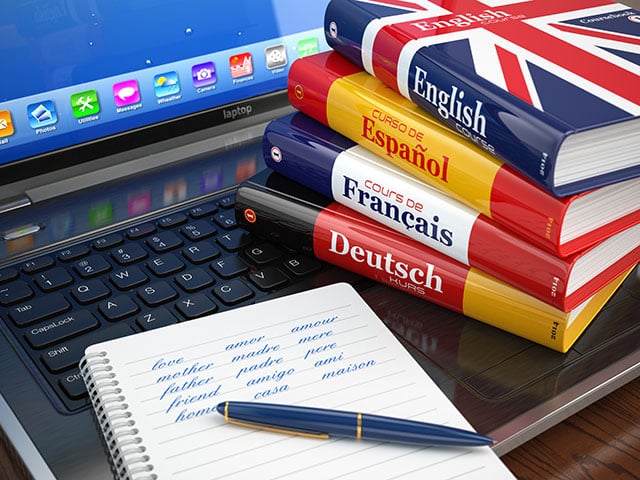 Number 1 is: Speak the language as often as you can. Get out there and mix it up with native language speakers. One thing you need to remember is that a passive knowledge of the language isn't enough. You need to have an active knowledge of the language. When I was teaching myself German back in the 1980s before taking a trip to Germany, I met weekly for conversation with a German expat who lived near our home in La Mirada, CA. At first he did most of the talking, of course. But gradually my participation increased. Before leaving for Germany I was able to preach four times in his German-speaking church. One of my former students at the seminary who wanted to do his Ph.D. in Germany began meeting weekly with a German expat. Today he is enrolled in a German university and speaks German fluently.

Number 2 is: Don't be afraid to make mistakes. I have made so many mistakes in trying to speak a foreign language it isn't even funny. Or maybe it is! One time I was speaking to a woman and her daughter who were from El Salvador. To make small talk, I asked the woman, "Quantos hombres viven en El Salvador?" Peals of laughter filled the room. Once things had quieted down, I asked them what I said that was so funny. When they told me I should have used gentes or personas instead of hombres, they started laughing again, and this time I joined them. Another time I used my German to order a pepperoni pizza for Becky and me in Schleswig-Holstein. When a pizza covered with red peppers was served, we all got a big laugh out of it. You got to be willing to laugh at yourself if you're going to learn a foreign language, that's for sure. Just move on and keep going.

Number 3 is: Remember your paradigms. In my Greek textbook we have reduced rote memorization to an absolute minimum because students are taught how to divide words into their bits and pieces of meaning. This means that when I ask them to "learn by heart" a paradigm, they must memorize it and then constantly review it so that they never lose it.

Number 4 is: Practice constantly. Just this morning I watched several YouTubes in Spanish. Last week I listened to a sermon in German. I even love listening to Latin being spoken out loud. (At the University of Basel, Latin is still spoken during graduation ceremonies for doctoral students.)

Let's return to point #1 for a minute. I sometimes hear that people will get offended if you try to speak their language. Personally, I've found the opposite to be true. When I'm in Greece I order my food in Modern Greek even though the server probably speaks excellent English. When I lived in Basel, Becky and I would often the cross the border into France. My French was far from perfect but people still seemed to appreciate my attempt to speak their language. Most of the time people will genuinely affirm your efforts because they expect that you don't speak their language. My last Sunday in Basel I gave the morning sermon at the Baptistengemeinde not in High German but in Basel German, much to the delight of the congregation. When I gave a lecture in Spain at the University of Madrid, I had the temerity to give it in Spanish (though it had a marked Mexican flavor since I had lived in Southern California for 27 years).

That said, don't be surprised when people jump in and correct you. That's all for the good. I have traveled all across this great big world and have tried to use my limited language skills. I have always  been answered politely, even when I was being corrected.

P.S. If you're asking, "Why, then, don't you use the Living Language approach when teaching Koine Greek?" I do have a response. But that's for another post. 😇