Ser Versus Estar in John 1:1

Lately I've been practicing my Spanish by watching videos in German. That's right -- I'm learning Spanish via German. This was my lesson for the day:

Did you know there are two verbs in Spanish for the one German verb "to be" (sein)? They are ser and estar. When do you use ser and when do you use estar? In the video, examples of ser include:

What do these uses of ser all have in common? Die Identität, that is, identity. Ser describes a permanent identity.

So when do we use estar? Here are some examples from the video:

Estar is used for feelings or places, but without a sense of permanence. Feelings can change, places of residence can change, etc. Contrast soy and estoy in these sentences:

Estoy bien. Es geht mir gut, I am well (though I might feel unwell tomorrow).

Estoy in Hawaii. Ich bin in Hawaii, I am in Hawaii, but tomorrow I might be in California.

Finally, I loved this example from the video:

But I can also say:

Estoy feliz. Ich bin glücklich, I am happy (at this time).

Now here's the same verse in the Nueva Versión Internacional:

Notice that the RV uses the same verb three times (era, the past tense of soy). However, the NVI uses three different verbs: existía, estaba, and era. These different verbs nicely bring out the different nuances of the text.

Here's one more rendering of John 1:1, this time from the Traducción en Lenguaje Actual:

Are you getting the picture? There is never a direct one-to-one correlation between any two languages. We have to use the grammar of the language we are translating the Bible into. And even then, we are often confronted with several possible choices.

As you can see, languages are amazing things. As John McWhorter has put it, "A language is a fecund, redolent buzzing mess of a thing, in every facet, glint, and corner, even in single words" (What Language Is, p. 9). Who is adequate for such things? Not me, that's for sure. (Just now I had to look up the meaning of "fecund," "redolent," and "glint.") But the Spirit who started the church is the same Spirit who enables us to carry on today. You are gifted. I am gifted. We are probably gifted in different ways. The one thing we have in common is that we both use language for communication. I suppose, then, the more we understand about how languages work (and not just our own language), the better off we'll be when it comes to things like translating and understanding the Bible.

Ironically, and as counterintuitive as it might seem, I've found one of the best ways of learning a foreign language is by studying it in yet a third language. I felt like I had mastered German for the first time only after I had mastered a book called Englisch für Fortgeschrittene. I also love using books like this one to hone up on my Spanish: 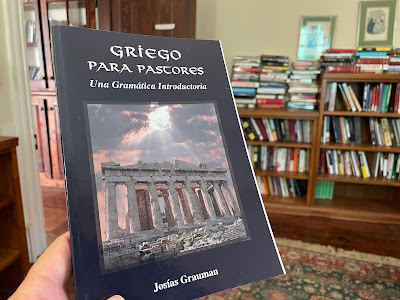 At any rate, let's press on together. It's a pretty narrow road we travel, we who study languages. Let's buckle up and get going.