The Baton Is in Your Hands

I began my teaching career when I was barely old enough to spell G-R-E-E-K. I had just graduated from college and was beginning seminary. I shudder to think about how clueless I was at the time about all things pedagogical.

During my first semester of teaching, I took two classes at Biola in the Christian Education Department: College Teaching Procedures, and Tests and Measurements. If my teaching skills remained in their infancy, it sure wasn't going to be because I hadn't tried to improve them. And now, many years later, I ask myself: "What kind of an example have I been to my students? And how can I know if I've been successful?"

This morning I began a deep dive into Paul's first letter to the Thessalonians. I've been in 1:1-10. 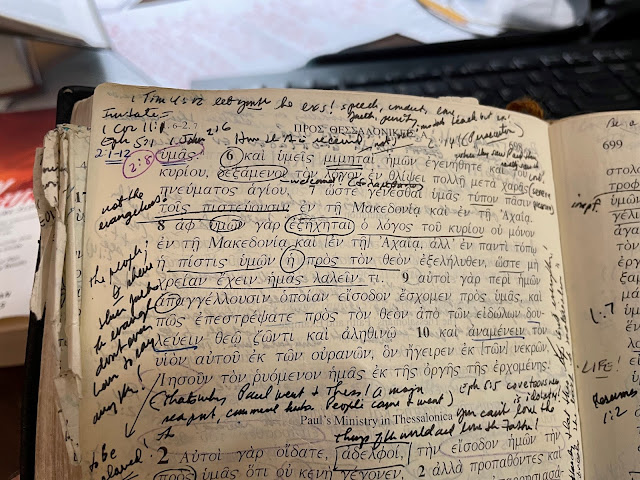 Paul tells the Thessalonians: Remember where God found you. Remember his faithfulness to you. Let's get properly centered on the one who is called Faithful and True (Rev. 19:11). But notice too: They had first become imitators of Paul, then of the Lord (1:6). When Paul says in 1 Cor. 4:16, "You must become imitators of me," he adds, "just as I became an imitator of Christ." This is always the biblical (and logical order): We imitate others in their own imitation of Christ. It is saying, "Dave, have you been a good role model for your students? Because Christian education is always likeness education."

Think about Jesus. Heb. 5:8 says that he "learned obedience." To learn (manthanō) means to practice something. To say that Jesus learned obedience is another way of saying that he practiced obedience. To say that my students "learned" Greek, then, means much more than they learned facts about Greek. Those who learned should be able to use, apply, perhaps even teach. To those who failed to practice what they had studied, Seneca warned, "How long will you be a learner? From now on be a teacher as well!" (Ep. 33:8-9). Presumably, those who have had the good fortune to learn Greek have much to apply both in their own lives and by teaching others.

With privilege always comes responsibility. We shouldn't try to capitalize on one while neglecting the other. When you graduate, the question won't be: "What did you learn?" It will be, "How did you leverage what you learned for the kingdom?"

This is the true power of teaching. A good teacher can absolutely alter the trajectory of an entire life. Harry Sturz, my Greek teacher at Biola, did that for me. He saw in this kid from Kailua Beach a classroom teacher. Then he said, "The baton is now in your hands."

I likewise say to my students after 45 years of Greek instruction: The baton is now in your hands.