A little anecdote from the Gospel of John about Easter Sunday has got me, a runner, smiling out loud. You remember what happened. John and Peter had gone to the tomb of Jesus -- a tomb the women had reported as empty. John records that he and Peter had a little "race" there and that he had reached the tomb first (John 20:1-10) 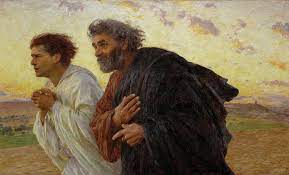 When Peter finally arrives, puffing and panting, John has stopped at the entrance while Peter goes straight in. Finally John tells us that "the other disciple, who had reached the tomb first, also went inside, and he saw and believed." I think it's hilarious that John goes out of his way to tell us not once but twice that he had reached the tomb before Peter had. Never underestimate male competitiveness.

I believe there is a competitive streak in every one of us, whether you are a runner or not. If we keep that tendency under control, the competitive push within us can become a great motivating factor in our lives. It can stimulate us to train harder and push ourselves further than we might have otherwise. But there are many other benefits of running that have nothing to do with age group awards, bragging rights, or finish times. I find that when I am in a competitive mood, I sometimes no longer value my weekly runs for their own worth but only how they can prepare me for races. The tendency is to push too hard, and finally you push too far and break down with fatigue or injury. Then you either can't or won't run. When, however, we put competitiveness in perspective, we can gain pleasure and joy from running at any pace, even a slow one.
Remember: the goal is to become an athlete, not necessarily a winner. Someone has said that competitors look for races they can win, while athletes look for races that can bring out the best in them, win or lose. Yes, there's a lot of fun in low-key competition. But it's important that we never lose sight of our main goals in running, which for me are health, relaxation, and the good feeling I get from exercise.
I hope this was helpful. I am learning so much about myself through running, even about the kind of competitive spirit I have at times. My two cents: Don't compare yourself to others, or base your self-worth on running (or anything other than Christ for that matter). In a race I like to be competitive with others, but not to the point where I don't enjoy the race if I don't meet my goals. The only thing that matters at the finish is that I did my very best during the race and that I gave it my all.
P.S. Today's bike: 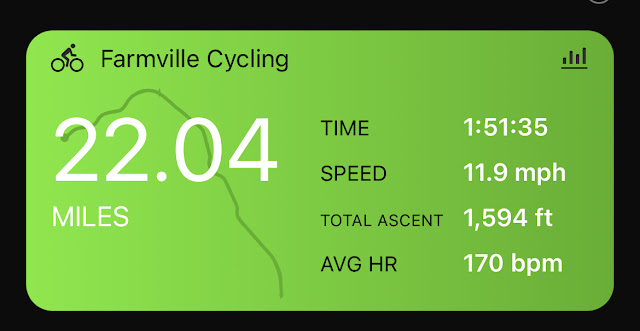