As everyone knows, a great way to learn a foreign language is through songs. It's not just about learning lyrics or vocab. It's about grammar too. Over the years I've developed an approach to foreign language learning that involves so much more than learning vocabulary. When I was teaching myself to speak German back in the 70s, I ran across a wonderful Christian song. I first heard it on a 3 month trip to Germany when I was playing trumpet on an evangelistic brass octet. I've always been someone who wants to be able to speak like a native, and I believe that listening to music is one of the quickest ways you can reach that goal. Without further ado, here's the ditty I learned: 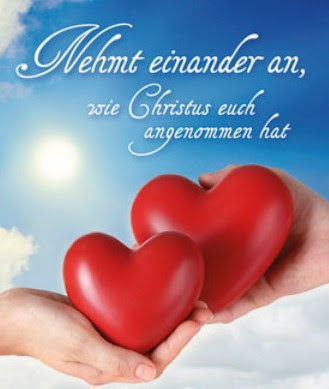 Basically the song is about how believers in Christ need to accept each other as Christ has accepted them (see Rom. 15:7). You could probably translate the song as:

as Christ has accepted you.

Extend to each other the (your) hand,

and be ready for reconciliation.

No rhyming in English, but in German -- wow!

So once you've got your song, you need to evaluate it as study material. The point is to understand the song line by line. Try to translate as much of the song as you can without Googling it, and then go online to see how accurate your translation is. Then use what you've gleaned to study three things: vocabulary, grammar, and idioms. In terms of vocab, here are the major terms you need to understand in this song:

Other words may be unfamiliar to you as well: einander (each other), seid (imperative of "be"), and bereit (ready). Notice that (thankfully) some words are complete no-brainers: Christus (Christ) and Hand (hand).

Next, pay attention to the grammar of your song. Try to find grammatical structures that you might not be too familiar with. It could be a tense or a mood or a syntax change, It could have to do with word order. It could be anything. For example, of the grammatical usages I highlighted when I was learning this song, one of them had to with word order. A thing called "sentence inversion" exists in German. In German, when you say certain kinds of phrases, the sentence sort of goes backwards. Thus "as Christ has accepted you" in English becomes "as Christ you accepted has" in German. If I say want to say "I don't know if I have time" in German, it comes out "I don't know if I time have." That feels so unnatural in English but it's actually very good German. I can recall writing on the first page of my beginning German grammar the words, "Ich will lernen Deutsch." A few lessons later, I had to correct it to "Ich will Deutsch lernen." Definitely feels clumsy when you first start speaking German.

The last thing I do when going through a song is to look for any unusual idioms, slang, or cultural  features I might have missed earlier. In this particular song, you will notice that the German says "extend the hand" instead of "extend your hand." That's just the way things are said in German when the owner of the body part (in this case the "hand") is obvious because of the context. In other words, English tends to use pronouns like "his" in situations where German would leave them out. Your tendency will be to add the pronoun but it's not necessary. Beware of trying to make the German "sound better." The Germans literally have a verb called verschlimmbessern that combines the German verbs for "make worse" and "make better" -- meaning "making something worse while trying to make it better."

Just a few language learning tips from someone who's had to work hard at foreign language acquisition. Hope this helps you in your own language journey.