Wow! What a fantastic day it's been so far. These days in my morning Bible time I've been in Luke. Got through chapters 1- 8 today. What a compassionate and merciful Savior we have! Then I went to South Boston to do some errands and get in a run. The idea was a simple 3 mile shakeout run. 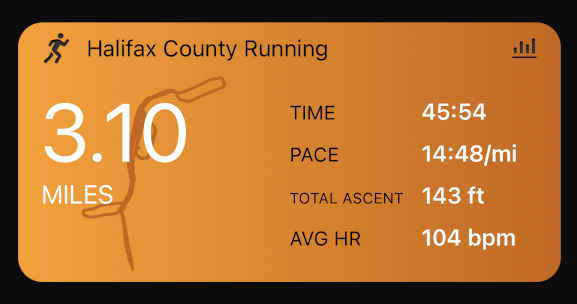 As with the half marathon on Saturday, today I did a 4 minute/30 second run/walk. This is the split I hope to maintain during the ultramarathon this weekend. I also wore today the same outfit I will run in for the ultra. That included my earbuds of course.

Somehow I managed to get a blood blister on my big toe last Saturday. 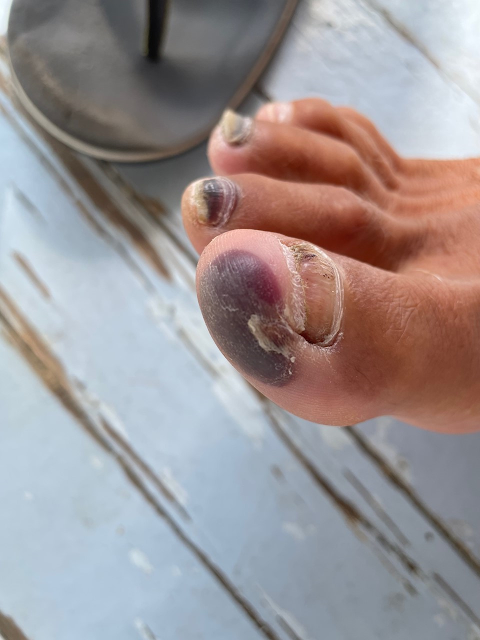 But it doesn't hurt and I imagine it will be fine come race day.

Since I tutor German I'm always looking for new ways of explaining this or that grammatical subject. Today I listened to one of the best podcasts on German. If you've never heard of Coffee Break German, you have now. 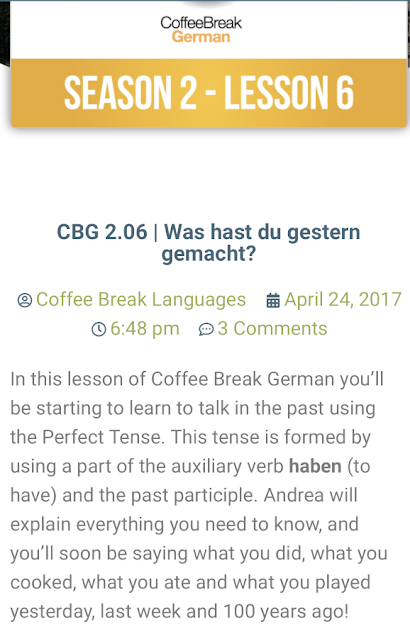 All I can say is: Elephantastich! (Yes, I just made that German word up, but you can get away with that in Deutsch.) The podcast is a dialogue between a Scotsman named Mark and a Swiss lady named Andrea. Today's lesson was on the so-called perfect tense, which is formed by using the "auxiliary" (helping) verb haben ("have") and the past participle (Partizip 2). So, follow along with me on my run today as I explore the wonderful (but sometimes confusing) world of the German perfect tense. 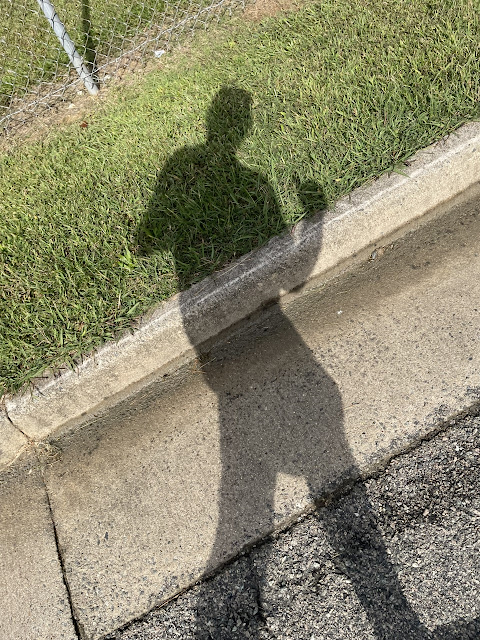 Here are a few examples from today's podcast:

Now notice this sentence: "Ich habe in Paris gewohnt." This can be translated either as "I have lived in Paris" or simply as "I lived in Paris" (without the "have"). Likewise, using the examples above, we could translate each of them into English without the auxiliary verb "have":

Confusing? Not in German. But to an English speaker, very much so! Take this sentence that Andrea uses:

What is my point here? It's very simply this: There is never a one-to-one match between any two languages, not even languages that are as closely related as German and English. Major differences include:

Believe me, it can take a while before you get used to these differences. Because of my familiarity with Greek, when I hear "Er hat in Frankreich gewohnt," I automatically think that the person must still be living there. Over time, however, you will begin to appreciate German as German, without always trying to compare it with English or Greek or any other language. When it comes to verb tenses, German is actually very simple. You basically have only two verb tenses to cover the present and the past:

So, if you want to say, "I have lived in Berlin for three years," you might be tempted to say, "Ich habe fuer drei Jarhe in Berlin gewohnt." But now you know that you should say, "Ich wohne seit drei Jahren in Berlin."

Make sense? If not, listen to the podcast I linked to above. Any language is fun to learn. But remember: the method of learning plays an important role.