Here's the course map for this Saturday's half marathon in Ashland, VA.

As you can see, most of the race is along country roads. Ashland is just a small spot in the larger scheme of things. Easy to miss on a map. Yet the town has a rich history, an expanding tourism base, and an unspoiled mix of cornfields and restaurants. Amazingly, it boasts its own college -- Randolph-Macon College, with nearly 1,600 undergraduate students. The college was originally located in Boydton, just a few miles down the road from where I live. The Latin and Greek based curriculum of the 1830s has expanded to include 38 majors and 34 minors. (Sidebar: I find it amazing just how many colleges there are in Virginia, most of which you've probably never heard of -- Averett, Bluefield, Ferrum, Hollins, Longwood, Mary Baldwin, Marymount, Radford, Richard Bland, Shenandoah, etc.)

The town was named "Ashland" in 1858 after Henry Clay's estate in Kentucky. It's safe streets make it a town of joggers, cyclists, and walkers. In 2014, Ashland was named one of America's best small towns. Plus, if you need a Super-Walmart, you're only 16 miles north of Richmond.

The half marathon actually begins right beside the train tracks, where visitors are treated to frequent CSX freight trains and Amtrak passenger trains. 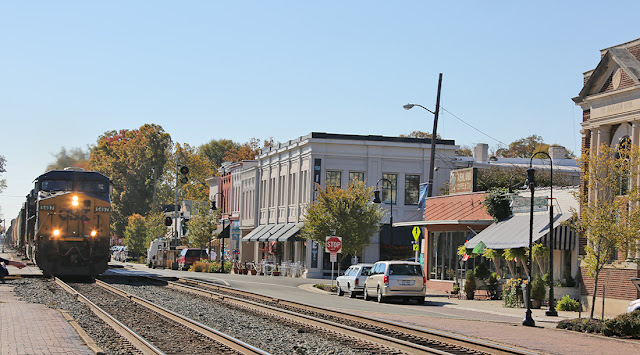 Ashland reminds me a lot of Farmville, another of my favorite small towns in the great state of Virginia. I love the sense of community you find in small towns. I love the clean air, the fresh produce, and the local products. That's the spirit that made America great. Above all, parking and traffic are never a big deal. You can join the co-op, enjoy the farmers' market, and wander around the cute downtown. In a big city it's considered rude to acknowledge another person as you go about your business. In a small town, it's considered rude if you don't.

There's no sense in romanticizing small towns. They have a downside, too. Believe me, I live near one. I can see advantages of living in a big city like Wake Forest or Raleigh. But the big city was not meant for me. There is no place I'd rather live. I love you, small town USA!