To Greet Or Not to Greet

That is the question. I'm referring, of course, to running etiquette. When you are passing somebody on the trail going the other way, do you greet them?

I've been notorious for being so much "in the zone" that I often don't make an effort to greet another runner. Especially toward the end of a run I am so tired that the best I can offer is a nod and a smile. I don't blatantly ignore a friendly greeting. Sometimes a wave has to suffice.

I'm getting better. And more intentional. Recently I've started at least making eye contact with other runners and waving. More often than not they wave back. If they don't, I don't take it personally. They may just be "in the zone."

When we moved to Basel, I can remember how hard it was for Becky to adjust to some aspects of the culture there in Switzerland. Being from the South and naturally gregarious, she greeted everyone she met on the street. Most of the time she was ignored. At first we thought the Swiss were being rude. Wrong. They were, in a sense, just being them. The Swiss do not normally greet other people while walking. Becky and I had to learn that cultural lesson and try to adapt to it (just like we had to adapt to a million other aspects of living in Basel, like not being able to take a shower after 10 pm per city ordinance).

On today's run I'm going to make it a point to say a cheerful "Good Morning" to everyone I see. In other words, I don't want to be so caught up in my running that it doesn't even register that I failed to greet them until 5 seconds later when it's too late to turn around and say "I'm sorry." 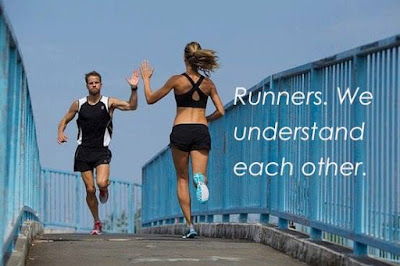