This morning I put the finishing touches on the little talk I'm suppose to give this Saturday at the Clearview Apologetics Conference. 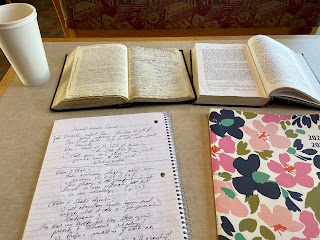 The theme is, "Can We Recover the 'Original' Text of the New Testament?" My answer to that question is probably going to create some controversy because some of your favorite New Testament scholars are going to tell you the opposite of what I'm going to be saying. I don't really care because this is just my opinion. If you disagree, you disagree. I'm not an expert in textual criticism. I don't have a Ph.D. in the field. But I've been studying this stuff for 46 years and I think I know what I'm doing. I'm going to make it real simple. Not going to talk over your head, not going to try to confuse you with big words, not going to use a high-falutin German word that nobody can pronounce correctly or even knows what it means. It'll be the K-I-S-S method from beginning to end. I hope that when I'm done you'll be convinced that there is a viable option beyond that of the Critical Text or the Traditional Text views.
I truly hope you can attend the conference. People are always telling me how busy they are. They don't have time to study textual criticism. They are tired. They are overworked. Their pastor told them that textual criticism was spiritually destructive. Folks, the things that are tough in life require making a definitive decision and not giving in to excuses. Just because something is hard doesn't mean you shouldn't do it.
Bottom line: Be informed. Be a Berean. Never stop thinking.
Posted by Dave Black at 1:06 PM
Email ThisBlogThis!Share to TwitterShare to FacebookShare to Pinterest
Newer Post Older Post Home