Lessons from an Elevator (???)

I snapped this pic in the elevator of the hotel where I stayed Friday night. 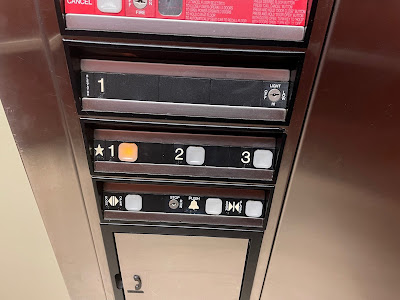 You can see that the building had three stories. So when we read in Acts 20 that Eutychus fell to his death from the "third story" while sitting in a window, we might assume that the building he was in had no ground floor. But in Europe, this is exact what you commonly do have. Let's compare what one might find in Richmond, VA with what one might find in Basel, Switzerland. I'll list the Swiss term first.

Now, if a "story" is about 10 feet, then Eutychus fell either 30 feet or 40 feet. Of course, this doesn't matter, except that scholars like to argue about everything. They seem to miss the real point of this narrative:

By the way, this information is relevant if you ever find yourself trying to locate your hotel room in Europe. The apartment Becky and I lived in while staying in Basel was called the Parterre. It was neither the ground floor nor the first floor but something in-between. It was not a one bedroom apartment; it was a one room apartment. Tiny! In Switzerland, the higher up you live, the more status you are likely to have. So you might say that Becky and enjoyed a very lowly societal status. Shoot, we were as poor as church mice. But we had the Lord, and we had each other. What more could you ask for?