As all of you know, I am addicted to reading. And here's an essay my assistant brought to my attention this week. 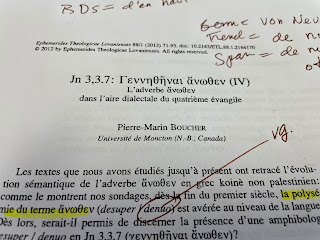 It was a fascinating read. In it the author argues that the Greek adverb anothen in John 3:3 should be rendered "from above" rather than "again." In other words, Jesus said "You must be born from above" rather than "You must be born again." The author also argues that the translation "again" entered the English versions (not to mention French, German, Spanish, etc.) via the Latin Vulgate, where the adverb denuo ("again") was used instead of desuper ("from above").

He notes that the use of the adverb anothen in Koine Greek generally highlights the spatial relation rather than the temporal. This is seen in the Gospel of John itself, where anothen is used three other times and always with the meaning "from above" (John 3:31; 19:11, 23). It's interesting to me that the Nova Vulgata adopts the rendering desuper in 3:3, though not in 3:7. As for the English versions, here's what I found:

These versions use "again":

These versions use "anew":

And these versions use "from above":

Most Spanish versions have de nuevo, though a couple have otra vez. As for the French, de nouveau is used except in the BDS (d'en haut = "from the top/from above"). The Luther Bible has von neuem, as do the other German versions (though I did find one example of neu).

Reading this, I wondered why we on the ISV committee chose to render anothen as "from above." Since it's been 25 years since I produced the base translation for that version, I can't recall what discussion, if any, we had about this verse. The term itself permits either translation. Should we, then, consider both meanings to be equally valid and combine them? This is apparently what someone has done. 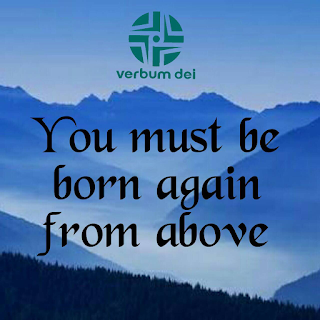 Or is Jesus intentionally using a term that's ambiguous in order to draw Nicodemus into the conversation?