How to Think in a Foreign Language

Is there a turning point in language learning when you begin to think in the other language? And yes, I'm including the biblical languages of Hebrew and Greek. Here's something that might help: Walk around and say simple sentences. It may sound weird but it definitely works. Don't think of a sentence in English and then try to translate it into Greek. Just start speaking.

I did this yesterday with practically everyone who walked through my office suite. I asked them to say, for example, "I am a teacher" in Greek or Hebrew or Latin or German or whatever language I knew they had been studying. If you've had a year of any of these languages, that should come quite easily. There are two great advantages in doing this. Number 1, it forces you to think in the other language. And number 2, it exposes you to everything you don't know.

It's important that we keep pushing ourselves to improve beyond our current level. You may think to yourself, "Yeah, I know Greek." But when you get into a situation where you actually have to use the language, then you realize that there are all sorts of gaps in your education. You want to be able to consistently train yourself to use the language in different situations. So if you are talking to me about, say, John 1:1, and you begin to tell me, "In the beginning was the Word ...," I might say to you, "Quickly, say that to me in Greek (or Latin or German or French or Hebrew)." Unless you're put into a situation where you have to talk in Greek, you're probably never going to improve your ability to think in the language. Try to transition yourself to the point where you can start thinking in the target language.

I do remember when I arrived in Basel in 1980 to begin my doctoral studies. I found my major professor in the university library and we began to chat (in German, of course). At one point he told me he was going out for a cup of coffee. "Darf ich Ihnen begleiten?" I asked, meaning "May I accompany you?" He smiled at me and said, "Darf ich Sie begleiten?" He gently corrected my pronoun, and off we went for coffee. (I had actually been thinking in Greek while speaking German.) I spoke very little English with my professors and peers when I was in Basel. You see, my goal was to try and become proficient in German, and you can't do this if you're speaking English all the time.

I've said a lot here, so let me summarize. It takes time to think in a foreign language because what you have to do is detach yourself from what you've been familiar with your whole life. It's quite the challenge and it takes perseverance. To make this transition you need to be trying to think in that language as much possible. I will add that thinking in your target language is much easier when you have a good handle on its grammar, so don't neglect to study that as well. Yes, it's demanding, and yes, it will expose your limitations. But that's a good thing. There's no rule as to how to do this. Experiment and see what works for you.

I'll close with a quote from George Sayer's biography of C. S. Lewis. 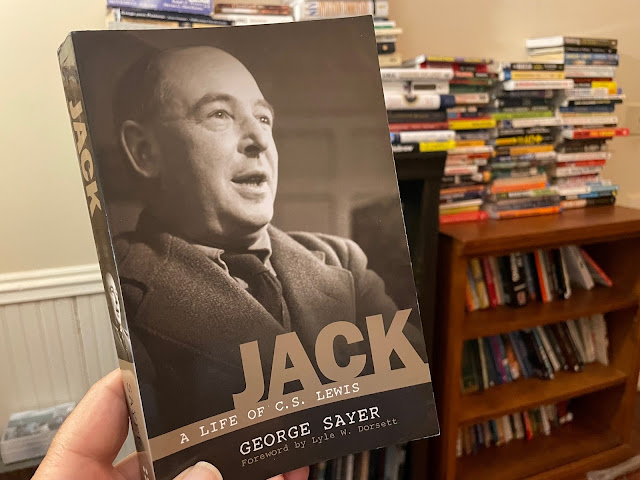 He found that he could think in Greek.

Congratulations on your progress, and happy language learning!