It's hard to believe, ladies and gentlemen, that the semester is over for me, as in COMPLETELY DONE. How did that happen? A shout out to everyone who made the days and weeks fly by so pleasantly for me. With additional time on my hands, life is all about writing and writing and more writing. But this morning I've been multi-slacking more than anything else. I love it, don't you, that the English language is always changing and adding words to its lexicon, like "multi-slacking." This must drive dictionary editors crazy. How in the world do you accommodate the fluidity of the English language?

Even the Greek of the first century was a very fluid thing. I once published an essay in which I attempted to rebut an argument made by a scholar that Mark's diction was inferior to that of Matthew's and Luke's. Language is often used unwittingly as a tool for stratifying people on a social totem pole. We use "standardized" forms of English to give cachet to our professional or social goals. Likewise, we might avoid slang because people might think less of us. We have to remember that the same person can use language in different ways depending on purpose, audience, etc. The tradition is clear that Mark never set out to write a Gospel. He simply recorded the words of the apostle Peter as the latter was giving a series of talks in Rome. That's one reason why Mark reads less like a work of literature and more like a series of personal anecdotes. It is rather unintelligent, all this talk about Mark's "inferior" grammar. (See my book Why Four Gospels?)

Does this mean that one day "should of" will replace "should have" as acceptable in a student term paper? (Yes, I see this all the time.) Is "fantabulous" a real word? I suppose we could argue that a word is "real" if one person uses it and the person he or she is communicating with understands it. Every generation has introduced new words into the English dictionary. When Paul used theopneustos in 2 Tim. 3:16, he expected to be understood, even though his readers had probably never seen the word before. 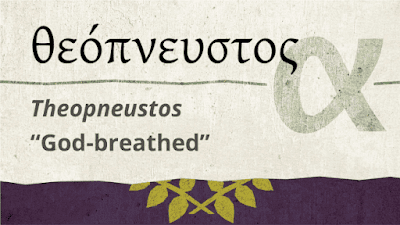 As long as new words and new usages convey meaning, I'm for it. Don't tell me that "ain't" ain't a word where I live. (Mistaking "it's" for "its" or "their" for "they're" falls into a different category.")

Words, as a series of letters, have no inherent meaning. Neither do the vocalizations that come out of my mouth when I am communicating with others. To go back to yesterday's blog post, I could just as easily say "Ich bin Lehrer" as "Ego sum magister" or "Ego eimi didaskalos." People simply agree upon the meaning of these vocalizations in order to communicate their thoughts to other people, thus reaching common goals most efficiently. My Swiss friend might say "I bi" instead of "Ich bin," but there is nothing wrong about his diction. Ditto for Paul saying that he was the "leaster" of all the saints in the sense that he was "less than the least" (Eph. 3:8).

I am grateful for dictionaries. I don't care what the subject or topic is, I use them all the time. The only way English will remain the same is if we stop speaking it. Which, by the way, is a good argument in favor of conversational Latin!