A Lesson from the Life of C. S. Lewis

Why is it that I am so attracted to the writings of C. S. Lewis? I mean, besides the obvious reason -- his writings are impeccable yet accessible, models of strength-in-humility, always transparent. Perhaps there are a few hints in the book I just finished reading. 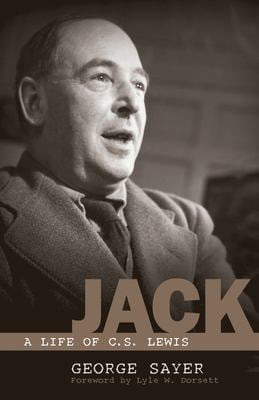 Here are a few quotes. Once you read them, I think you'll know where I'm going with all of this.

He never took for granted his gift for languages.

Jack needed only enough guidance to teach himself ....

Jack led a double life. With one faculty of his mind, he was logical and rational. With another faculty, he was as intensely romantic as a young ninetieth-century poet ....

Jack was sensitive all his life to every sort of beauty....

He knew that if he really liked a book, he would want to read it again and would find new delights in it when he did.

Jack read many books that became favorites for life.

All his life Jack took the duties and delights of friendship seriously.

Jack tried to help his pupils get the best degrees possible ....

[H]e would walk for a few minutes ... praying, praising God, and contemplating the beauty of nature.

He wrote ... in plain, everyday language.

As soon as he had climbed to the crest of the hill, he would stand drinking it in, with a serene, happy look, almost of ecstasy, on his face.

Do you see it? Jack was a normal human being. He was a man who had not mere knowledge of the times but an understanding of the times. Furthermore, it was a supremely practical knowledge (as we see in A Grief Observed and The Screwtape Letters). He was out to make Christ, the Son of David, Lord of all.

After Joy died, he taught us that the only thing to do with the past is to learn whatever lessons are to be gained and then forget it. Perhaps his greatest contribution to the Christian faith was not the occasional burst of genius but the day-in and day-out testimony of Christian living in the mediocre and the monotonous.

Always aware of cheap optimism, he was nevertheless a cheerful human being. He relished the great outdoors because there he found time to praise and worship his Creator. He was "on the go with God." Do you not sense that? Jack never thought of God as putting on a pageant for our entertainment. When God comes down from above we must rise up from beneath.

I get the feeling that Jack was "always abounding in the work of the Lord." Even when he was puzzled and baffled by what life had thrown at him, he knew there was One alongside to help. He never seemed to forget Calvary or take the gospel for granted. His supreme goal was never survival or success or even self-satisfaction. What mattered to him was stewardship, and it is required of stewards that they be found faithful. Christ, for him, wasn't only Item Number One on the program; he was the program.

We need a refresher course in C. S. Lewis to straighten out our warped thinking when we measure a church by quantitative rather than by qualitative standards. Reading about the life of Lewis reminded me that only we as abide in Christ can we abound for him. The only service that counts in God's eyes is the service that is the spontaneous expression of our love for Christ. As Lewis wrote in The Four Loves, all of our effort spent in religious work accounts for absolutely nothing if it is merely spent by the natural or carnal self. Only the love that is produced by Christ in our hearts is acceptable to him.

It's been well said that God has no favorites but he does have intimates. The kind of reverent intimacy that C. L. Lewis enjoyed with his Lord seems to me to be a far cry from the coarse familiarity of the church today. Maybe there is still a lesson to be learned from his life.