Lessons from the Life of F. F. Bruce

Sometimes we learn things in the oddest of places. The "odd" place for me last night was this biography of F. F. Bruce. 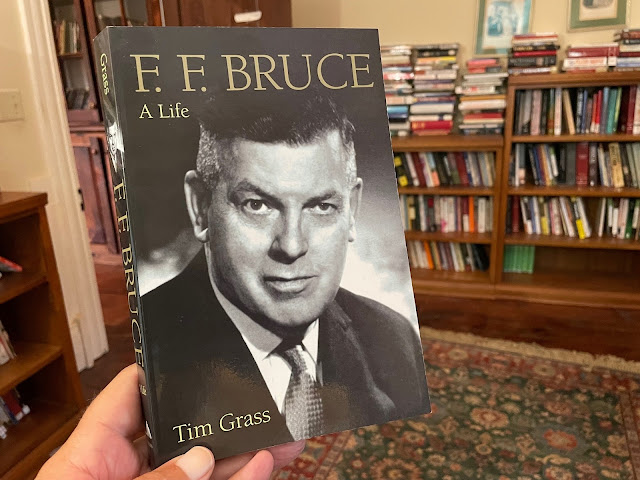 And, since you must be totally bored to be reading this blog, I will share some of these lessons with you.

" ... no man ever did more to demonstrate how evangelical faith and total academic integrity walk hand in hand" (p. x).

"... my father [taught me] never to accept anything offered in the way of Christian faith or practice unless I saw it clearly for myself in the Scriptures. This advice I have regularly passed on to others, warning them especially not to accept anything just because I have said it" (p. 14).

"[Bruce] saw his life's work as being to mediate the fruits of higher critical study of the Scriptures to ordinary Christians" (p. 15).

"... he spoke plainly and intelligently during a service, in a way that all present could grasp" (p. 25).

"Back in Britain during September 1935, he was surprised to receive a letter encouraging him to apply for a position as Assistant in Greek at the University of Edinburgh" (p. 29).

"Bruce's first book was to prove to be one of his most enduring: Are the New Testament Documents Reliable?" (p. 39).

"Toward the end of his career, Bruce could assert: 'I can think of no better foundation than a classical education for the professional cultivation of biblical studies'" (p. 50).

"One was his emphasis on the need of immersion in the biblical languages and the value of a close inductive study of the primary sources which made that possible" (p. 51).

"Beyond the student world, he became a frequent lecturer on what were then known as extra-mural courses, giving a series of evening classes for the benefit of the general public" (p. 54).

"Bruce saw no tension between teaching in the university and doing so in the church" (p. 62).

"Bruce made clear that he did not see himself as one of those scholars who contented themselves with producing works of scholarship which nobody read or noticed; rather, his greatest reward was to see enthusiasm and interest being sparked in his reader as a result of his work" (p. 76).

"... he supervised around fifty doctoral students while at Manchester, said to be more than any other British supervisor in the field had ever coped with" (p. 1-6).

"A few years before retiring, Bruce was struck by the recognition that he had attained every professional ambition which he could have expected to do ...." (p. 141).

Okay, you whipper snappers out there who are just beginning your academic career as New Testament teachers. You have in the life of F. F. Bruce a wonderful model of what that really means.

It's an interesting coincidence that Bruce began teaching Greek when he was 25. (I was 24). His first book was published when he was 33. (I was 32.) Bruce retired from fulltime teaching at the age of 68. (I retired at 69). Bruce taught for a total of 43 years. (I taught for 44 years.) Apparently Bruce was just as surprised to be asked to teach Greek as I was.

Bruce died in 1990 but his legacy lives on. And it does so, not only in his writings, but in the students he mentored through their doctoral studies. Three-fifths of them were from overseas, and a good many of them from America. If you've ever read anything by Ronald Fung, Ward Gasque, Don Hagner, Murray Harris, Morna Hooker, Seyoon Kim, Moises Silva, and David Wenham, then you have been the beneficiary, if indirectly, of Bruce's scholarship.

I'll close with the words of the author of F. F. Bruce: A Life:

"... Bruce taught not only by his words and writings, but by his life. For that life many continue to give thanks."