Here's a new insight from Heb. 1:1-4 -- at least a new insight for me. In verse 3 we read, "after he had made purification for sins." The KJV and the NKJV both add "by himself" based on a variant reading here. But even if we reject the words di' heautou we can still derive the translation "by himself" (or something like it) from the middle voice of the participle poiesamenos. 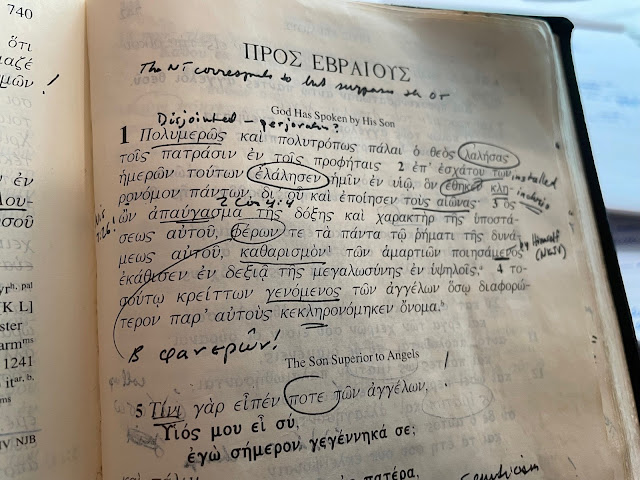 I might suggest the following rendering of the passage:

God, who spoke to our forefathers in many different times and in many different ways in the prophets, has now, at the end of the present age, spoken directly to us in a Son whom he has appointed to be the heir of all things and through whom he created the entire universe. This Son -- radiance of God's glory, exact expression of his nature, the one who holds everything together through his powerful word -- has effected in person the purification of our sins and has taken his seat at the right hand of the highest Majesty, having become as much superior to the angels as the name he has inherited is better than theirs.

Note: "in person," not because we are following the Majority Text here, but because of the voice of poiesamenos. "By himself" would also work, of course.

Let me know if I'm missing something.