Can We Trust the Gospels?

So much speculation and skepticism! Such were my thoughts after reading a recently published introduction to New Testament methods. The Gospels "are not even ostensibly objective accounts." "It is unlikely that Jesus ever delivered the 'Sermon on the Mount.'" Matthew was "probably dead" when the Gospel of Matthew was written. "Both Matthew and Luke improve Mark's syntax." (Are we still using that canard?) Mark's ending cannot possibly be original. We cannot know who wrote John.

I agree with those who say that the best term to use to define a Gospel is "theological biography." It is history plus commentary, narrative along with interpretation. However, this fact does not make the Gospels less historical or biographical. Scholars have expended much energy trying to determine the specific circumstances behind each of the four Gospels. This matter (called the Synoptic Problem) is somewhat subjective. In my book Why Four Gospels: The Historical Origins of the Gospels, I put forth a theory that disagrees with the leading view of our day, namely that our earliest Gospel is Mark's, later used by Matthew and Luke. I do so because I am a contrarian and obscurantist. Actually, I disagree with this view because church history is against it.

The early church fathers are unanimous that our first Gospel was Matthew's. Moreover, Clement of Alexandria states that those Gospels containing the genealogies of Jesus came before the others. He's referring, of course, to Matthew and Luke. This order perfectly fits the historical setting of the early church. Matthew's Gospel was written first because it met the needs of the earliest Christian community in Jerusalem, which was composed mostly of Jews. Luke's Gospel, however, was needed as soon as the Good News of Christ began to spread among the Gentiles. Mark's account seems to have been composed later still during Peter's stay in Rome. Finally, the Gospel of John, which church history dates around the year 96, was needed to supplement the other Gospels by more forcefully bringing out the deity of Christ and his union with the Father. We thus have four stages in the development of the Gospels:

No overarching hypothesis is possible for solving the Synoptic Problem. One thing is certain, however. The four Gospels are completely trustworthy and accurate portrayals of the life and teaching of Jesus Christ. As these Gospels circulated throughout the ancient world, the Spirit of God guided the earliest Christians to accept them. This four-dimensional presentation adds a richness we would not have possessed if we had had only a single narrative of Jesus' life. 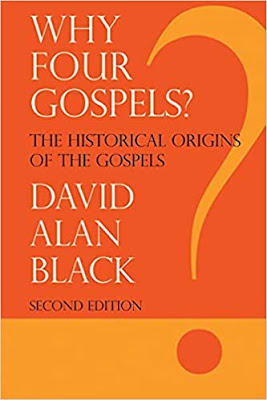